He was born in the family of the Karhâda Mahârashtra caste of Brâhmanas,[4] a wealthy Indian family. Apart from learning the tenets of his religion by his father from an early age, he also received a very good English education. When he was ill as a child, he met his guru Koot Hoomi who promised to take him under his protection.[5] The name Mavalankar is pronounced with the stress on the first syllable, but no accent is necessary.[6] 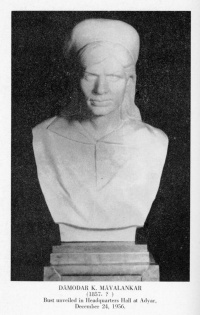 In 1879 he met H. S. Olcott and H. P. Blavatsky in Bombay, after they had just established the Theosophical Society's temporary Indian headquarters there. "On August 3, 1879, he joined the Society at Bombay; several of his relatives, including his father and his uncle, also became members."[7] Damodar, however, went a step further, giving up his caste. In 1880, he officially became a Buddhist while in Sri Lanka, taking Pancha Sila along with Col. Olcott and Madame Blavatsky.[8] His actions displeased his family and led to conflict, due to them desiring him to return home and live with his wife who was betrothen to him in his childhood, or face the consequences of being cut out of his will. In response to this, Damodar gave up an income of 50,000 Indian rupees to provide for the future of his would-be wife, and continued to live and work with the Theosophical founders.

After meeting H. P. B. his interior vision gradually opened and again he knew the Guru of his childhood vision, his Master K. H., which sealed his devotion to theosophy. His remarkable psychic powers made him the centre of many phenomena. Between 25-27 Nov. '83 he visited the ashram of his master to undergo certian training. From frail, timid, deferential, he returned bronzed, robust, bold, energetic.[9]

He continued his work in this way until on February 23, 1885, when he went to Tibet to join his Master. "Almost alone among hundreds of other earnest aspirants was he found qualified to proceed to the Tibetan mountain-home... of the Mahatmans Koot Hoomi and Mor;ya."[10] Wearing Tibetan disguise he was brought to the frontier by his escort. Confirmation was sent by the ashram in June 1886 stating that Damodar was alive and safe.[11][12]

Damodar is Secretary to the Theosophical Society, and a Brahmin of high caste. At Moradabad, on the evening of the 10th November, 1882, he announced apropos of a decision by Colonel Olcott, that he would go in the double or phantasm to the Headquarters of the Society, more than 1,000 miles away, and obtain a modification of it. He shut himself up in his room, came out in a few minutes and gave a message purporting to come from Headquarters, situate at Adyar, a suburb of Madras. The message was taken down and attested by several witnesses. He then added that a confirmation of it would come by telegram, and this actually occurred the next morning...

The other Damodar case is of a similar character; he announced an accident to Madame Blavatsky which was only made known by telegram the next day and which he could not have possibly ascertained in the ordinary way.[13]