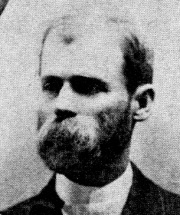 According to historian W. Michael Ashcraft:

He was a member of the Pacific Coast Committee and perhaps the most important name among California Theosophists in the 1890s. Anderson grew up in Kansas and served in the Civil War. A schoolteacher, he moved to California and earned a medical degree. His spiritual journey was just as varied. his family was Presbyterian, but he left that church and became a Universalist, then an agnostic, and while investigating Spiritualistic phenomena heard about Theosophy through Judge and The Path. Anderson later opposed Tingley's Point Loma community, accusing early Point Loma residents of scandalous activities and fearing the centralization of efforts in one locale depleted resources elsewhere. But he left an indelible mark on California Theosophists, helping to lay the groundwork for what became the Point Loma enterprise.[1]

Jerome August (or Augustus) Anderson was born on July 26, 1847 in Indiana, but grew up in Kansas. He may have worked as a school teacher in Neosho Falls, Kansas in 1870.[2]

According to an 1896 biographical sketch:

Dr. Anderson was a remarkable child. He could read at the age of four, and enlisted in the United States cavalry at the age of sixteen. Though self-educated, he passed without preparation an examination, including a course of twenty-seven studies, of the California public school system, and got a percentage of 96. He was graduated from the Medical College in Ohio, and completed his education in the Medical department of the University of California. He is president of the alumni association of his department of the university, and is a fellow of the San Francisco Gynecological Society and many other medical associations.[3]

In 1873 he was graduated as an allopathic physician from the Toland Medical College in San Francisco [now University of California School of Medicine].[4] He stayed in San Francisco, setting up a practice as physician and surgeon.

Dr. Anderson married around 1882; His wife Levina [Watkins or Vrice] immigrated from England in 1880. The had three daughters.[5]

He joined William Quan Judge, Annie Besant, Jirah Dewey Buck, Claude Falls Wright, and other prominent Theosophists as a speaker at the World's Parliament of Religions in Chicago, 1893. He was president of the San Francisco TS, and a member of the Executive Committee of the Theosophical Society in America under William Quan Judge.