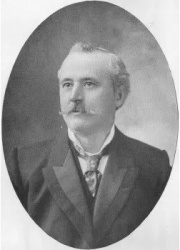 Alan Leo, born William Frederick Allan (1860-1917), was a British astrologer, author, and publisher, and a member of the Theosophical Society. He has been called "the father of modern astrology".[1]

William Frederick Allan was born on August 7, 1860 in Westminster, England. His Scottish father, an ex-soldier, left the family when his son was nine years old, so William was left with his mother, a member of the Plymouth Brethren and a rigid Biblical literalist. He had little formal education, left home as soon as he could support himself. From the age of sixteen, he was employed in many jobs, mostly in sales.

In 1885, while he was managing a grocer's shop in Manchester, he met a Dr. Richardson who taught him the fundamentals of astrology.[2]

It was customary for professional astrologers to work under pseudonyms in nineteenth-century England, so Allen used his surname and rising sign to create the nom de plum "Alan Leo." Eventually he changed his name officially by deed poll. Leo joined the occult society, The Celestial Brotherhood, run by the Welsh seer and mystic John Thomas (aka Charubel).

Leo was a regular writer for the Brotherhood's magazine, The Occultist, which appears to have had a connection to the Hermetic Brotherhood of Luxor...

In 1888, Leo was living in Peckham, London as a salesman for a confectionary firm when he met the astrologer Frederick Lacey (Aphorel), also a member of Thomas' Brotherhood. Leo made contact with Lacey after seeing his letter in Astrologer magazine, which asked for astrologers to contact him so that they might meet.[3]

Lacey introduced Leo to Theosophist/astrologer Walter Richard Old, one of Blavatsky's Inner Group and General Secretary of the Theosophical Society in England.[4] "He introduced Leo to theosophy in the summer of 1889 by taking him along to one of the many gatherings held at the Society's headquarters in Lansdowne Road."[5]

Ada Elizabeth Murray Burch was born in April 5, 1858 in Salsbury, Wiltshire as the daughter of Samuel and Murray Burch.[6]

Bessie was not drawn to the religious beliefs of her father, an orthodox Jew, and sought among texts of other religions for inspiration. Her Christian mother had left the household when Bessie was sixteen. The young woman took up phrenology and palmistry.In November 1890, an elderly Theosophist gave her a copy of Esoteric Buddhism by A. P. Sinnett. She wrote, "I had thirsted for the truth and had at last found the living water and knew I should never thirst again." A month later she heard Annie Besant lecture at Southampton.[7] After discovering that a very active Theosophical Society lodge existed at Bournemouth, she applied for membership and was admitted on September 29, 1892.[8] A friend of Alan Leo, H. S. Green, persuaded a friend at the Bournemouth Lodge to subscribe to the Astrologers Magazine that Leo was publishing. Bessie asked for Mr. Leo to do her horoscope, and "was so impressed with the results that she arranged to meet Leo. In February 1893, Leo called on Bessie and they immediately hit it off."[9]

In the spring of 1893 she married John Joseph Spark, but in 1894 petitioned for nullification of the union, which was granted on June 17, 1895.[10][11] Evidently she preferred a chaste union, which she later found with her second husband.[12]

After she married Alan Leo around 1896 they became members of the Blavatsky Lodge in London. In 1897 the Leos helped to establish the Hampstead Lodge. She served as President and he as Secretary, and the lodge’s official address was their home at 9, Lyncroft Gardens, Finchley Road, N.W. Mrs. Leo also presided over the Surbiton Centre.

Henry Steel Olcott wrote of Miss Burch in 1895, before she married Mr. Leo:

For my part, I hold to the idea which I have expressed before, that, seeing that the Eastern and Western systems of palm-readings are quite different, and yet that equally successful tracings of the subject’s life events have been made by proficients in both of the schools, it is not so much the hard-and-fast system of interpretation of the palm-lines as the possession of a psychical insight which enables the palm reader to trace out the vicissitudes of the subject’s life. This Mrs. Leo seems to have.[13]

Alan Leo was admitted as a member of the Theosophical Society in Hampstead on April 14, 1891, less than a month before the death of its founder, Helena Petrovna Blavatsky.[14] His address was given as 9 Lyncroft Gardens, London, N.W., and he continued living at that Hampstead location until his death.

Soon after becoming a member, Leo and Frederick Lacey established the Philalethian Lodge in Brixton. After marrying, Alan and Bessie Leo "founded another theosophical lodge, the Hermes Lodge, in which astrology was a prominent feature."[15]

In 1909, the Leos visited the headquarters in Adyar, Madras, India, and they traveled with Dr. Besant and Isabel Cooper-Oakley from Adyar to the annual convention at Benares.[16] In England they hosted visiting Theosophists in their home.[17]

In 1911 the Leos returned to Adyar with Dr. Besant and Jiddu Krishnamurti. They were early members of the Order of the Star in the East.[18]

Work as an astrologer

On November 21, 1889, Leo and Frederick Lacey began publishing The Astrologer's Magazine, later renamed to Modern Astrology. Within two years the venture was breaking even.

The most attractive feature of the magazine for most readers was the offer of a free horoscope for new subscribers. In the first year alone, Leo and Lacey worked flat out to produce the 1,500 horoscopes ordered.

Lacey's other commitments led him to resign from AM in 1894. Leo continued the magazine while combining his day job as a commercial salesman with giving lectures in astrology and theosophy, and rented an office off Fleet Street to run the magazine.

The year 1895 was a difficult one for AM. Over 4,000 free horoscopes had been sent out, many resulting in requests for more detailed work. Although a horoscope service wasn't originally intended, it became almost unavoidable. From 1893, Leo charged for more than the most basic delineation. This was to become extremely profitable. Leo still sought to convert astrologers to his idea of astrology as a spiritual science and AM became Modern Astrology, and a theosophically oriented publication in July 1895.[19]

Building on this success as an astrologer, writer, and publisher, Leo was able to found the Astrological Society. It opened on January 14, 1896 in London with Robert T. Cross as vice-president and H. S. Green as treasurer. Within a year the Society had one hundred members. In 1901 he resigned as president and founded the short-lived Society for Astrological Research.

Profits from Modern Astrology and horoscopes went into publication of astrology books for mass consumption. The Modern Astrology Office had nine employees. Leo was very popular with the public despite some criticisms of his occult view of astrology, and accusations of plagiarism.

Leo’s next project was the founding of the Astrological Institute in 1912, which offered a range of facilities, including qualifying examinations and a library. It announced a complicated system of membership and multiple regulations. The Institute did not do well and was already floundering when war broke out.[20]

In 1914, Leo was charged with fortune-telling, but the case was dismissed for lack of evidence. Three years later, he was charged again, and this time he was convicted on July 16, 1917. He paid a small fine and court costs, but the stress took a toll on his health. During the next six weeks, on holiday in Bude, Cornwall, he wrote extensively on how to restate astrological work as character readings and to take out the element of inflexible destiny that had led to accusations of fortune-telling. On August 30, 1917, he died of a cerebral hemorrhage.[21] His colleague H. S. Greene completed the final work.

Mrs. Leo wrote of her husband:

he devoted himself to the one ideal of purity in thought, word and deed, and for twenty-five years he was engaged in putting his ideal into practice; and his progressed horoscope and death figure are significant of that embodied purity which he succeeded in bringing into the physical and making an accomplished fact. All his lower vehicles became obedient to the master hand that controlled them.[22]

He did not smoke or drink alcohol, and his diet was vegetarian. Bessie wrote a biography of her husband and took over his work editing Modern Astrology and publishing books. 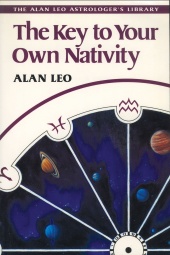 Leo served as editor for The Astrologer's Magazine and later Modern Astrology. The Union Index of Theosophical Periodicals lists 46 articles by or about Alan Leo. Mrs. Bessie Leo also wrote for Theosophical periodicals, at least 16 articles in all.

Alan Leo also wrote for many other periodicals. In January, 1909, for example The Co-Mason printed his article on "Astrology and Co-Masonry."[23]

Astrology for All series

Astrology for All was a series of seven books that began by with the stated objective of restoring the Astrology of the Chaldeans. In 1917 W. S. Randall published a "reference index" to the seven volumes, in which he listed their titles:

Alan Leo's Astrological Manuals series refers to popular books by Alan Leo and his closest associates that were collected into a series under Alan Leo's famous name. Some were printed as miniature books. 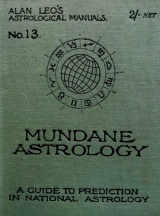 Alan Leo acted as publisher for most of his own books, using the Modern Astrology Office and his home address. L. N. Fowler & Co. published some volumes and were trade agents for sales of the books. Most titles were issued in multiple printings and editions, and by other publishers. The works are listed here in alphabetical sequence:

Leo's journals and books have been collected by Philip M. Graves and released by Astrolearn.com as a DVD boxed set under the name "Godfather of Modernity: the Alan Leo Legacy".

Volume 2 - Itinerant to Eternity - all issues of Modern Astrology published from 1913 through to around 1938.

Kim Farnell biography of the Leos