The American Theosophist and writer Geoffrey Avery Barborka (1897-1982) was a serious and deep student of H.P. Blavatsky's life, work and teachings. He conducted for many years classes on Madame Blavatsky's magnus opus The Secret Doctrine. Probably his most well-known books are The Divine Plan (an in depth commentary on The Secret Doctrine); H.P. Blavatsky, Tibet and Tulku; and The Mahatmas and Their Letters.[1] 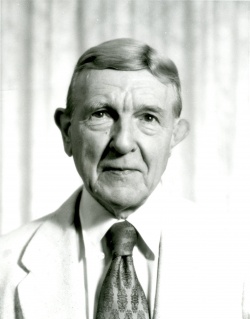 Geoffrey Avery Barborka, was born September 6, 1897, in Chicago, only son of Bessie and Vaclav (of Czechoslovakia). Vaclav, employed in the family horological business, was a musician and Freemason. In December 1900 he moved his family to the Theosophical Headquarters, Point Loma, enrolling his son in the Raja Yoga School, and began teaching violin, harp, organ, and other instruments. Geoffrey progressed to first grade 1903, high school 1911, and college 1915, receiving his degree 1920. In 1923, being over 18 he became an official member of the Theosophical Society in Point Loma. He earned a Bachelor of Arts degree in 1929, followed by a Master of Arts in 1935 from Theosophical University, specializing in languages. Inheriting his father's musical ability, he took up the violin, and The San Diego Union of April 27, 1908 reported that a violin solo by him was the highlight of the evening's performance by the Raja Yoga orchestra and chorus, and brought vociferous applause. Within a few years he began work at the Press, as a stenographer and monotype compositor, among other duties. He was solely responsible for typesetting the entire Point Loma edition of Isis Unveiled, and The Secret Doctrine, published in 1917, and again in 1925; the proofreaders marveling at the absence of typographical errors. About this time he began language studies, developing a proficiency that would later serve him well as scholar, author, and lecturer.

On April 2, 1938, he married Helen Ila Beale, who had come to Point Loma in the early 1920's from her native England. Her father, Dr Arthur A. Beale, a long time Theosophist, was author of The Evolution of Man's Mind. Geoffrey's Sanskrit studies resulted in a collaboration with the Merganthaler Co. to produce the only Sanskrit linotype machine in America, 1940. In 1941, after 40 years at Point Loma, the family moved to Oak Park, Illinois, where his father became a concert violinist with the Chicago Symphony Orchestra, and Geoffrey was employed as a linotype operator. He joined the TS, Wheaton, and began classes and talks, introducing them to the study of The Secret Doctrine.

After the war, with the death of his father in 1946, and an inheritance from a cousin, he planned to return to California, but his work on The Divine Plan delayed his arrival in Ojai, CA until 1962, when he purchased a modest house. His mother Bessie died there in 1965. 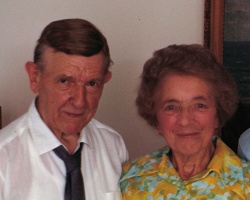 Geoffrey and Ila Barborka at Krotona, 1971

In 1966, Geoffrey and Ila visited England and attended the World Congress in Salzburg, Austria. On their return trip to California, they visited at the Olcott campus for a few days. They spent an evening with the staff in a question-and-answer session discussing The Secret Doctrine and The Mahatma Letters to A. P. Sinnett.[2]

Ila died in January 1977, and Geoffrey passed on September 30, 1982. During his lifetime he authored 11 books, and made several trips to England, Canada and elsewhere giving lectures. In 1970 he gave the Blavatsky Lecture in London, H.P. Blavatsky the Light Bringer.

In temperament he was very reserved, and early on embraced a degree of asceticism, demonstrating extraordinary self discipline with total commitment to his studies. He was seldom known to engage in casual conversation, remaining attentive and silent. Always extremely tolerant of non-theosophical groups, he took the time to lecture to a wide variety of new age types. Though reticent, he was kind, helpful, and was never known to say an unkind word about anyone. He loved tranquility, and Ila deferred to his wishes, whispering to overnight guests to be hushed in the house. She, was charming, congenial, and sociable, and it might be said that she was Geoffrey's liaison with the mundane world. That world was, while he was at Point Loma, remote, for he restrained himself to its 350 acres, seldom venturing beyond its confines. Deliberate and focused, he lived his life as he played the violin, with careful precision, sans vibrato.[3]

Mr. Barborka made significant contributions to Theosophical scholarship and literature.

The Union Index of Theosophical Periodicals lists 259 articles by or about Barborka, in The Eclectic Theosophist, the High Country Theosophist, and several others. A particularly valuable contribution to The Canadian Theosophist was his regular "Secret Doctrine Question and Answer" series.

These are books he authored: