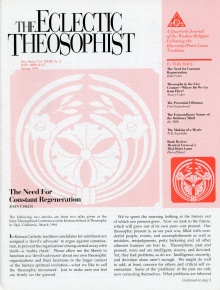 The Eclectic Theosophist was published by Point Loma Publications from March 1971 to Winter 1995. The editors were W. Emmett Small and Helen Todd. It was a bi-monthly magazine with the object:

to share with members and friends of the Theosophical Movement the best in theosophical literature, past and present, explaining and forwarding the esoteric philosophy, and to share with its readers the outstanding current events in the various theosophical Societies.[1]

The Union Index of Theosophical Periodicals offers an index to this periodical, and all of the issues are available in digital form at present from IAPSOP.