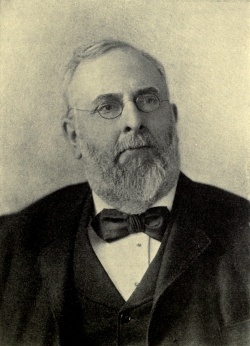 Reverend James Henry Wiggin was an Unitarian clergyman and editor who was present at the founding of the Theosophical Society.

Wiggin was known in Unitarian circles as "J. Henry Wiggin." He edited a Unitarian newspaper, The Liberal Christian.

On September 4, 1875, he published in The Liberal Christian an article titled "Rosicrucianism in New York" in which he described a meeting he had with The Founders a week before the lecture given by George H. Felt after which the formation of the Theosophical Society was proposed.[1] Col. Olcott quotes this report as follows:

He names H.P.B., myself, Signor Bruzzesi, a New Jersey judge and his wife, and Mr. Charles Sotheran (who had procured for him from H. P. B. an invitation to be present). He expresses his wonder at the range and depth of the conversation, remarking: "It would be discourteous to detail the minutiae of a friendly conversation where there was no desire for publicity nor any magic display, or offer notions about it. The phallic element in religions; recent wonders among the mediums; history; the souls of flowers; Italian character; the strangeness of travel; chemistry; poetry; Nature’s trinity; Romanism; gravitation; the Carbonari; jugglery; Crookes’s new discoveries about the force of light; the literature of Magic—were among the topics of animated discussion lasting until after midnight. If Madame Blavatsky can indeed bring order out of the chaos of modern spiritism she will do the world a service."[2]

It seems that Rev. Wiggin was present at that first meeting on September 7, 1875.[3]

In the meeting held on September 18 he was appointed as part of a committee appointed to select suitable meeting rooms for the nascent Society,[4] and on October 30 he was elected as one of the "Councillors".[5] He was a member of Council of the TS until March 1876 when he resigned and the Baron de Palm took his place in it.