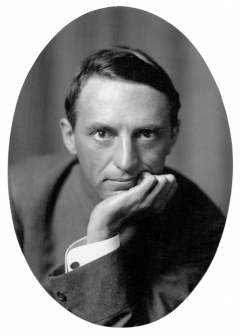 Kenneth Morris (31 July 1879 – 21 April 1937) was a Welsh fantasy writer and theosophist. He lived at Point Loma from 1908 to 1930 as a staff member. He and Talbot Mundy were friends, and often reviewed each other's writings in The Theosophical Path.[1]

As a child his imagination was nurtured by Welsh folktales and by the Mabinogion, the primary collection of Welsh mythological stories surviving from medieval times. Usually published as a book containing eleven tales, only four (each of which is named as a separate "branch") are considered to be part of the Mabinogion proper. Morris's father died when he was six, and the family moved to London, where he was educated at the famous school, Christ's Hospital. In 1896 he visited Dublin and encountered the Theosophical Society, which he joined enthusiastically. [2]

According to reviewer Anderson:

Morris was a prolific writer, publishing a great number of essays, poems, dramas, and stories in various theosophical magazines. With regard to fiction, Morris wrote three novels and about forty short stories. Two of the novels, The Fates of the Princes of Dyfed (1914) and Book of the Three Dragons (1930), are imaginative re-workings of Welsh mythological stories. His other novel is a fantasy about the ancient Toltecs of central Mexico, The Chalchiuhite Dragon, first published in 1992. Of Morris's short stories, ten were collected in 1926 under the title The Secret Mountain and Other Tales. All of his short stories, ranging through the mythologies of the world (Celtic, Norse, Greek, Roman, Taoist, Buddhist, etc.), were gathered in The Dragon Path: Collected Tales of Kenneth Morris (1995).[3]

Ursula K. Le Guin considers him to be one of the three master prose stylists of fantasy in the 20th century, together with E. R. Eddison and J. R. R. Tolkien. [4]

The last seven years of his life were spent back in his native Wales, during which time he founded seven Welsh theosophical lodges. He was President of the Welsh Section, based in Cardiff.

Morris wrote numerous articles for Theosophical periodicals. The Union Index of Theosophical Periodicals lists 144 articles by and about Morris under the name Kenneth Morris, but many more were published in theosophical magazines under variations of his name and under pseudonyms: Cenydd Morus, Quintus Reynolds, C. ApArthur, Sergius Mompesson, Wentworth Thompkins, Fortescue Lanyard, and Aubrey Tyndall-Bloggsleigh.