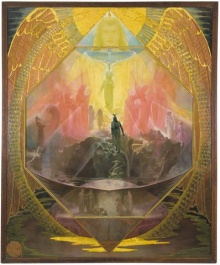 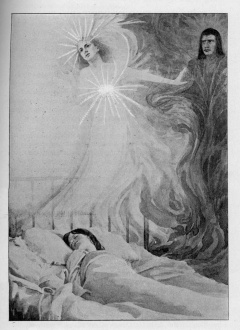 Illustration from September 1897 issue of Theosophy. 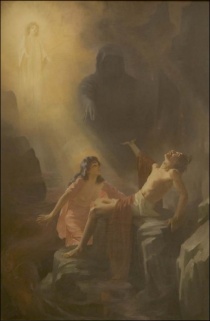 Dweller on the Threshold

Reginald Willoughby Machell (1854-1927) was an English painter whose best-known work is The Path. He joined the Theosophical Society after meeting Helena Petrovna Blavatsky in London, and later moved to the Point Loma community, where he painted, wrote, and designed furniture.

Reginald Machell was born in Barrow-upon-Humber, Lincoln, England, on June 20, 1854 to Richard Beverley Machell and his wife Emma.[1] His father was the vicar of Barrow. The household included three sons, two daughters, and seven servants.[2]

During his education at Uppingham School and at Owens College, Reginald was awarded many prizes for his drawing and for his study of the classics. He married Ada Mary Simpson on August 2, 1875.[3] That same year, he traveled to London to continue his studies, and the next year attended the Académie Julien in Paris.[4]

Machell had the opportunity to meet H. P. Blavatsky:

In 1887, through a friend of one of his aunts, Machell was introduced to Theosophy and eventually to Helena Blavatsky herself. Machell joined the Theosophical Society and in 1890 did some interior decoration in Blavatsky's Regents Park residence. He later moved his studio to the same building and the character of his work began to change toward mysticism and symbolism.[6]

The date he was admitted to the Blavatsky Lodge of the Theosophical Society was December 1, 1888.[7] A few years later, in December 1900, Machell and his son Montague moved to California and lived at Point Loma.

Machell took up a career in 1880 as a portrait painter. He became was a member of the Royal Society of British Artists, and exhibited at the Royal Academy. He illustrated two works by American novelist Irene Osgood. An Idol's Passion was a novel of "Oriental romance" dealing with the paranormal, published in a large and lavish folio edition. The Chant of the Lonely Soul was published the following year.[8]

Leaving for Point Loma in 1900 with his son Montague, Machell arrived on December 28 in the same party as Charles J. Ryan. Machell became actively involved with the decoration of the Lomaland buildings including architectural ornamentation, painted wall designs, and carved furniture and screens. He also carved his own frames which became an integral part of his paintings. Machell was a prolific writer and illustrator for the periodical publications on Point Loma as well as books such as Kenneth Morris' The Fates of the Princes of Dyfed (1914). He also frequently took part in the many dramatic productions including being appropriately cast as Phidias in "The Aroma of Athens." Machell's work is mystical in the extreme and certainly the most didactic of any of the Lomaland artists. It combines both Pre-Raphaelite and Art Nouveau stylistic tendencies. The whip-lash line and entwined tendrils typical of the Art Nouveau style are particularly evident in his wood carving.[9]

Among Theosophists, Machell is especially appreciated for his painting entitled The Path (6’2” x 7’5”), which is at the headquarters of the Theosophical Society, in Pasadena, California. Machell also constructed the frame for the painting in ornately carved woodwork. The work is very large - 6'2" x 7'5" [188 x 226cm].

His creativity in furniture making was noteworthy:

At Point Loma, he carved chairs, screens and stools decorated with forms reminiscent of Art Nouveau, Celtic interlace, Gothic tracery, flames and wings. They are wonderfully inventive, completely unlike any other furniture made in America. The throne he created for Tingley is typical: the back and sides of the chair are carved into fantastic writhing shapes and the whole is painted in a cream color. In effect, the chair is a platform for a collection of carved panels, a virtuoso display of design and chisel-work. But it’s not a great example of sound construction: the joints are held together with pegs, which are notoriously prone to coming loose. As for the symbolism of the intertwining elements of the disk and the winglike forms above, it’s anybody’s guess. Machell left no explanation[10] 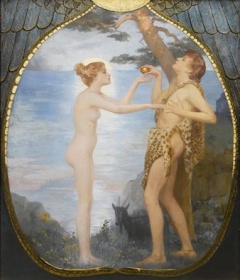 His work was exhibited at the Panama California Exposition in San Diego in 1915, along with that of three other Point Loma artists - Leonard Lester, Maurice Braun, and Edith White.[11]

Reginald and Montague moved to Point Loma in 1901. Ada and Henry may have stayed in England, but the historical record is unclear. Henry died on September 29, 1918, in World War I, and was buried in Pas-de-Calais, France.[12]

Reginald continued painting during his years at the Point Loma Homestead, and also created intricately carved wooden furniture such as chairs and screens. He also wrote some articles for Theosophical journals.

The younger son Montague grew up and was educated in the Point Loma society. In 1922 he and his wife Cora Lee participated in Katherine Tingley's lecture tour of nine countries in Europe. Montague acted as a press agent and musician.[13] He accompanied Mrs. Tingley again in Europe engaging in "educational and humanitarian work."[14] Montague later settled in Phoenix, Arizona with his wife Cora Lee and son Reginald, working as a music teacher.[15]

Reginald Willoughby Machell died in San Diego on October 8, 1927.[16] Private services were held on Monday, October 10 at Benbough Funeral Parlor under the auspices of the Point Loma society, and then a cremation took place.[17]

According to the Union Index of Theosophical Periodicals, Mr. Machell contributed at least 38 articles and also illustrations to Theosophical periodicals, principally Lucifer, Theosophy, The Path, and Sunrise. The newest magazine to use The Path is Lotus, published by the Pandacan Theosophical Society in The Philippines.