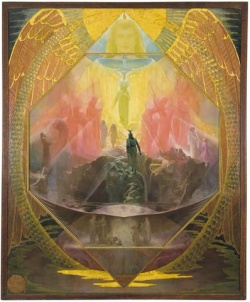 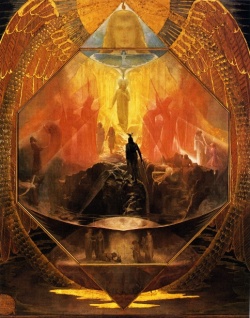 Another photograph of The Path

The Path is a large painting executed in oils and gesso by Reginald Machell, a pupil of Helena Petrovna Blavatsky. It hangs in the headquarters of the Theosophical Society (Pasadena). The work measures 74 inches by 89 inches (188 cm x 226 cm). The artist crafted the ornate frame himself, and the painting actually extends onto the frame.

Details from The Path

Bruce Kamerling wrote of the symbolism of this work:

The supreme condition is suggested in this work by the great figure whose head in the upper triangle is lost in the glory of the Sun above, and whose feet are in the lower triangle in the waters of Space, symbolizing Spirit and Matter. His wings fill the middle region representing the motion or pulsation of cosmic life, while within the octagon are displayed the various planes of consciousness through which humanity must rise to attain to perfect Manhood.

At the top is a winged Isis, the Mother or Oversoul, whose wings veil the face of the Supreme from those below. There is a circle dimly seen of celestial figures who hail with joy the triumph of a new initiate, one who has reached to the heart of the Supreme. From that point he looks back with compassion upon all who are still wandering below and turns to go down again to their help as a Savior of Men. Below him is the red ring of the guardians who strike down those who have not the " password," symbolized by the white flame floating over the head of the purified aspirant. Two children, representing purity, pass up unchallenged. In the center of the picture is a warrior who has slain the dragon of illusion, the dragon of the lower self, and is now prepared to cross the gulf by using the body of the dragon as his bridge (for we rise on steps made of conquered weaknesses, the slain dragon of the lower nature).

On one side two women climb, one helped by the other whose robe is white and whose flame burns bright as she helps her weaker sister. Near them a man climbs from the darkness; he has money-bags hung at his belt but no flame above his head, and already the spear of a guardian of the fire is poised above him ready to strike the unworthy in his hour of triumph. Not far off is a bard whose flame is veiled by a red cloud (passion) and who lies prone, struck down by a guardian's spear; but as he lies dying, a ray from the heart of the Supreme reaches him as a promise of future triumph in a later life. 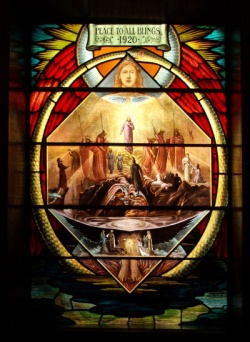 On the other side is a student of magic, following the light from a crown (ambition) held aloft by a floating figure who has led him to the edge of the precipice over which for him there is no bridge; he holds his book of ritual and thinks the light of the dazzling crown comes from the Supreme, but the chasm awaits its victim. By his side his faithful follower falls unnoticed by him, but a ray from the heart of the Supreme falls upon her also, the reward of selfless devotion, even in a bad cause.

Lower still in the underworld, a child stands beneath the wings of the foster mother (material Nature) and receives the equipment of the Knight, symbols of the powers of the Soul, the sword of power, the spear of will, the helmet of knowledge, and the coat of mail, the links of which are made of past experiences.[2]

Impact of The Path

This painting is one of the most widely recognized images in the Theosophical Movement. It has been used numerous times on magazine and covers, and as the topic of lectures. Members of the Leeds Lodge in England arranged to have it rendered in stained glass for their beautiful lodge building.