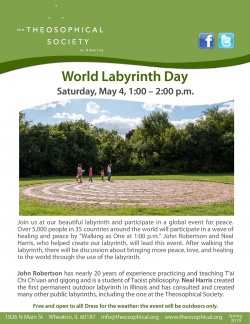 A Labyrinth (from the Greek λαβύρινθος labyrinthos) was in Greek mythology an elaborate structure designed to hold the Minotaur, a mythical creature that was half man and half bull. The Minotaur was killed by the Athenian hero Theseus who was able to escape with the aid of Ariadne, who provided him with a skein of thread.

[The labyrinth] is an archetype in the human mind. Labyrinth patterns are universal, being found as archaic petroglyphs, Amerindian basket-weaving designs, and paintings or drawings from all over the world. The earliest reported labyrinth was a two-story stone building in Egypt, described by the Greek historian Herodotus, but the name comes from the Cretan structure in the myth of Ariadne, Theseus, and the Minotaur, a pattern that also appears on ancient Cretan coins. In the Christian Middle Ages, labyrinths were often formed with colored paving stones in the floors of cathedral naves, especially on the Continent. Later, labyrinths were sometimes constructed of turf, herbaceous borders, or hedges – frequently in maze patterns and especially in England...

All labyrinths are a kind of game, but that does not negate their seriousness. According to Hindu lore, the universe itself is a game, a lila, that the gods play. Walking a labyrinth is following in the steps of Shiva Nataraja, the Divine Transformer who is Lord of the Dance.[1]

Scholars today distinguish between a maze (a multicursal puzzle with choices of path and direction) and a labyrinth (a single, non-branching path, which leads to the center), also known as a meander.

While some labyrinths are designed purely for entertainment, most are intended to serve spiritual practice. Walking a labyrinth can be a surrogate for a pilgrimage or as a means of walking meditation.

John Algeo described the experience, using the labyrinth at the Theosophical Society in America as an example:

You walk the Olcott labyrinth by entering from the northwest, where the stepping-stone path begins. You follow the path to the center, where you may wish to pause for a few moments. Then you reverse your direction and retrace your path back out to the starting point. In walking any labyrinth, you should always complete the pattern by following the path both inward and outward, rather than cutting across the pattern at any point. The inward movement needs to be complemented by a corresponding outward return.

If several persons walk a labyrinth together, they may pass one another, going in either the same direction or opposite to each other. They may pass in meditative silence or quietly salute each other by a nod of the head or a raising of the hands. The effect of meeting fellow pilgrims on the path is part of the labyrinthine experience. The labyrinth is a joyfully sacred space. You do not need to be somber around it, but if someone is walking the labyrinth, it is courteous to respect the need they may have for quiet concentration.

As you enter the labyrinth, you may focus your thoughts on a question or concern. You may walk the labyrinth with a quiet mind, sensing without particularizing the wonder of the pattern. Or you may walk it with some of its many symbolic meanings held in your mind as seed thoughts. In the labyrinth, as in life, there is no single right way to follow the path.[2]

Construction of walking labyrinths is typically of stone and gravel, or garden plantings. Finger labyrinths can be created using paper, ceramics, fabrics, or other materials. There are several common designs for labyrinths, with many variations. These are the Cretan style (left), Chartres style (center), and spiral (right):

Behind the L. W. Rogers Building, on the west side of the headquarters campus of the Theosophical Society in America, is a classical seven-circuit Cretan labyrinth. Composed of large stepping stones on a field of pebbles, the labyrinth symbolizes the seven aspects of the cosmos and the human being. Walking its winding path from the circumference to the center and back out again represents the involution and evolution of the universe, the birth and passing from life of an individual, and a quest to the center of our being and subsequent return to our divine source. Many visitors come to Olcott to walk the labyrinth throughout the daylight hours, when the grounds are open. 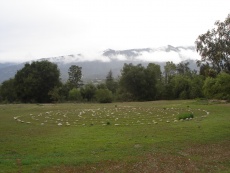 Krotona Institute of Theosophy in Ojai, California has a simple hill-top labyrinth of stones set in a grassy field.