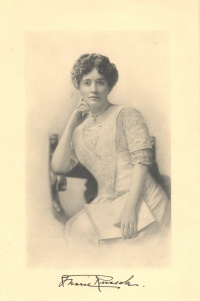 Marie Russak Hotchener (October 7, 1865 - March 4, 1945) was an American opera singer, architect, writer, editor, and secretary to H. S. Olcott and Annie Besant, prominent in the Theosophical Society (Adyar). She was known to friends by the "star name" of Helios. 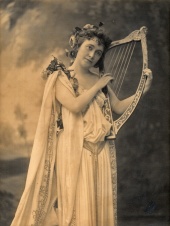 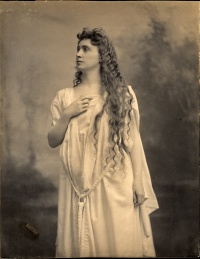 Mary Ellen (or Marie Elaine) Barnard was born on October 7, 1865 in the small town of Four Corners, located in Butte County, northern California. She was the daughter of Judge Allyn Mather Barnard of San Francisco and Sarah Ann McIntosh.[1] She was educated in Mills College, Oakland, California. Even as a young girl Marie had a lovely singing voice. The famous Spanish soprano Adelina Patti urged her to consider opera, and after study in Europe, Marie sang leading roles in Italian, French and German opera companies under the stage name "Marie Barna." She performed also in New York and Boston.

She was married to Justin Harvey Smith (1857-1930), a publisher, in Boston, 1892, but the marriage soon ended in divorce. In 1899 she married banker Frank Russak (1858-1914). New York newspapers described an elaborate society wedding at Newport, Rhode Island. The couple moved to Paris around 1901, but that marriage also ended in divorce. The split was not unfriendly, however, and Frank left about a quarter of his large estate to his former wife at his death while traveling on the passenger ship SS Minnetonka that was torpedoed on January 30, 1918.[2] On July 9, 1916 Marie entered into a marriage with Theosophist Henry Hotchener (1881-1959) that lasted for 29 years, until her death in 1945.[3] He was an investor and real estate developer, and later a manager in the motion picture industry.

Mrs. Russak became a member of the Theosophical Society in 1898. After meeting the President-Founder of the Theosophical Society, Colonel Olcott in London in 1906, she gave up her singing career to become his secretary. Among the musical engagements she declined was an an invitation from Cosima Wagner to perform at the Bayreuth Festival.[4] She traveled with Colonel Olcott to India in 1906. While on shipboard, he met with a serious accident from which never recovered. She was present at his deathbed, where she witnessed the well-known "visit by the Masters" to the dying president on February 17, 1907.

For the next four years she stayed in India acting as Annie Besant's secretary. In 1909 Miss Barnard was appointed to be an international lecturer, and traveled with the president on extensive tours, speaking in fluent French, German, and Italian.

"In addition to her natural eloquence and charm as lecturer and writer, she was a deep student of psychology, having studied with such scientists as Bernheim, Liebault and Charcot, attending their clinics in Nancy and at the Salpetrière in Paris. This scientific training enabled her to speak with authority before metaphysical audiences and student groups.[5]

Marie Russak helped found the Krotona Colony in Hollywood, in 1912, and toured the United States with A. P. Warrington to raise funds. During one of his terms as president of the American Theosophical Society, she served as vice president.

During her years with Mrs. Besant, they co-founded the Order of the Temple of the Rosy Cross.

Since 1910 Mrs. Hotchener has given herself and her talents also to a great international moment which brings the true secrets and lofty principles of Freemasonry to women as well as to men the International Co-Masonic Order. She was drawn into this Order, for which her temperament and background so well fitted her, by Dr. Besant, always the pioneer, especially in gaining privileges for women. Both Annie Besant and Marie Hotchener were 33rd Degree Co-Masons and members of the Supreme Council of International Co-Masonry in Paris. They traveled about together, establishing Co-Masonic Lodges in American and many other countries. To those of use who have worked with Marie Hotchener in this Order, she will ever stand as an ideal Mason.[6] 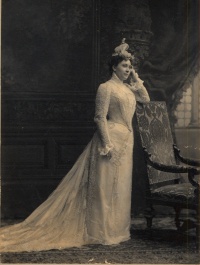 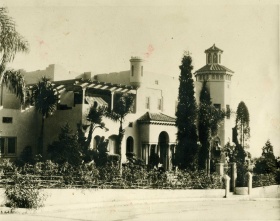 In Hollywood, Marie turned her creativity to architecture. She designed Moorcrest, the magnificent home of Charlie Chaplin at 6147 Temple Hill Drive, in a combination of Moorish and Mission styles. She and Henry built their own house next door at 6137 Temple Hill Drive. It was a similarly majestic building with five bedrooms, four bathrooms, and a tower like a minaret. That house served as the base of operation in 1930 when Marie Hotchener edited The Theosophist. After Annie Besant decided to take the editorial tasks back to Adyar, she gave Marie and Henry permission to publish another Theosophical periodical called World Theosophy.

Mrs. Russak designed a number of houses for Theosophists in Hollywood. 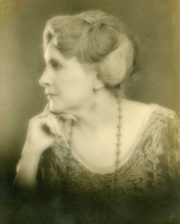 After a few years, the Krotona colony moved from Hollywood to Ojai, northwest of Los Angeles. While in Ojai at the Krotona Institute of Theosophy, the Hotcheners lived for a time in a home built by Grace Duff, with whom Marie had previously shared a house in Hollywood. In 1923 they donated that house to the Esoteric Section, which continues to use it for that purpose.[7]

The Hotcheners were members of the Besant Lodge in Hollywood, California.[8] 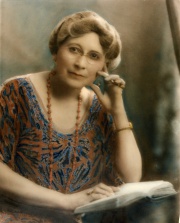 She passed away on March 4, 1945. Henry wrote to a friend, Arthur Jacoby, of her passing:

We have so long been unified in our three bodies - that there was no wrench, no sense of separation. She and I remain one and go on together. I feel a glorious exaltation that she is going on to higher work and then to get a new body when I hope to woo and win her again - honor beyond belief![9]