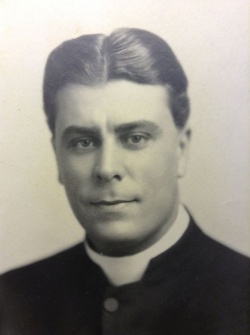 James Ingall Wedgwood was born at May 24, 1883, London, son of Alfred Allen Wedgwood (1842-1892) and Margaret Rosena Ingall (1854-1922), great great-grandson of the potter Josiah Wedgwood (1730-1795), and the grandson of the spiritualist Hensleigh Wedgwood (1803-1891), and the great nephew of Charles Darwin (1809-1882). He was an prominent English Theosophist in Theosophical Society (Adyar), also the first Presiding Bishop of the Liberal Catholic Church, Freemason, Co-Mason and Martinist. Passed away on March 13, 1951 in Farnham, Surrey, England.

Little is know about his early years. The following extracts are quoted from a short autobiography which he wrote for the Adyar Bulletin[1]:

"My liking of ceremonial was one of these early interests. One of my earliest recollections is that of standing with my nurse in the old Parish Church at Folkstone and watching a procession. I remember, even now, how stirred I was at the sight of it, and how I questioned my nurse later, when at Bedford, I passed a building bearing the inscription "Freemason's Hall". I had never heard that it was a secret society, there upon made up my mind to join it when I could. In due course I went to school (I was sent to a boarding school at the early age of five, being, I understand, more than a trifle unmanageable at home!), and on Sundays we went to the usual Anglican Church where there was no ritual worth mentioning. The services tired me, but from the very beginning I was always interested in the organ; and during the Psalms which were specially trying to my patience, I used to count the number of pipes visible in the organ case. Later I had a good deal to do with organ construction. But it was only after coming in touch with Theosophy that I realized that my chief interest in the organ, and music generally, centered round the magical and psychological effect of sound...
"But there was one important element in my childhood. My grandfather, Hensleigh Wedgwood by name, was one of the pioneers of the Spiritualist Alliance, and of the Society for Psychical Research. . .
"My mother was an extremely good clairvoyant (she figures in some of the Myers, Gurney and Podmore books), and knew H. P. Blavatsky. And so, although I knew nothing of Spiritualism or Theosophy, I heard of them, and took a great interest in the little I was told...
"My interest in the organ continued, and I liked to go to churches where there was good music. At about the age of seventeen, I strayed into a ritualistic church at East Clevedon, and heard a sermon which dealt incidentally with bowing the head at the name of Jesus. This interested me, and the Priest gave me a little book which soon turned me into a full-blown High-Churchman . I became a server at the altar and so gained some experience of ecclesiastical ceremonial. I had read a silly Protestant book called "The Secret History of the Oxford Movement", by one Walter Walsh; its effect was to fire me with enthusiasm to join all the supposedly secret societies therein "exposed". Those that I did join I found to be perfectly innocuous and really edifying, like the "Confraternity of the Blessed Sacrament."...
"I became sincerely religious, and on that account was greatly troubled because I found that the ceremonial side of the worship appealed to me a great deal more than prayer, etc., which, in my ignorance of "rays" I considered a wrong state of affairs. Gradually I abandoned the idea of being an analytical chemist and thought to enter the Church. My people were at first opposed to this, and I was not sure of my vocation; so I decided to take up the study of music as the most useful preliminary for a Clergyman's work, and, as destiny would have it, I was led to become a pupil of one of the chief authorities on the old Gregorian music or Plainsong."

Wedgwood attended Pretoria House School at Folkestone in Kent, and then went on to his father’s old school, Rugby. After leaving school he studied chemistry at University College, Nottingham, on the advice of the famous chemist, Sir Henry Roscoe (1833 – 1915).

He was for a time employed as an analytical chemist in York, where he lodged with the Reverend Patrick John Shaw (1869-1952), the newly appointed Rector of All Saints Church, North Street. Wedgwood also studied music at the Nottingham College of Music, and he studied the organ at St Albans, Nottingham under Dr Harold Gibbs (1928-1945). He then spent four years as an articled pupil at York Minister under Dr Tertius Noble (1867-1953).

Wedgwood also felt he had a vocation to the priesthood of the Anglican Church, and began theological studies whilst staying with Patrick Shaw despite the opposition of the Wedgwood family.

In 1904, in the midst of his musical and theological studies, Wedgwood attended two lectures by Mrs Besant. He had probably been introduced to Theosophy by his aunts, Effie and Hope, who had joined the Theosophical Society around 1892, having been attracted to it through their father’s spiritualism and by Mrs Besant’s social activism. As a result of his conversion to Theosophy, Wedgwood was obliged to leave the lodgings and his studies because the Rector disapproved of his newly found faith. Wedgwood renounced all thought of a vocation in the Church of England, and devoted himself entirely to the work of the Theosophical Society.

For some time Wedgwood attended the Sorbonne in Paris, returning to the physics of organ music, for which studies he was awarded the degree of Doctor of Sciences.

Wedgwood was admitted to the Theosophical Society in Yorkshire, England on September 7, 1904. [2]

In 1926, Wedgwood presented the Blavatsky Lecture on the topic "The Distinctive Contribution of Theosophy to Christian Thought".