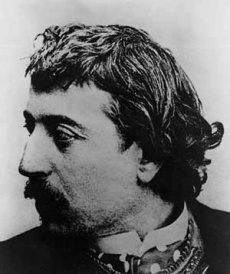 Paul Gauguin was a French post-impressionist and primitivist painter best known for his paintings of French Polynesia. He was heavily interested by Theosophy, Rosicrucianism, spiritualism, and other spiritual movements of the time.

Eugène Henri Paul Gauguin was born on June 7, 1848 in Paris. Due to the revolutionary upheavals in Europe at that time, his family moved to Peru to live with Mme. Gauguin's relatives there. After political unrest in Peru, Gauguin's widowed mother moved her children back to Paris. Paul was sent to live with an uncle in Orléans, and had his early schooling there. When Paul was fourteen, he attended a naval preparatory school in Paris. He served in the French merchant marine and navy for several years, traveling as far as India. Back in France in 1871, Gauguin took a job as a stockbroker at the Paris Bourse and was a successful businessman for eleven years. In addition to stocks, Gauguin dealt in the art market. He married Mette, a Danish woman, and they had five children. After a financial market collapse in 1882, he decided to turn his hobby of painting into a full-time occupation. By 1891, Gauguin's wife and family rejected him.

Gauguin's earliest paintings were Impressionistic, created while he was still a stockbroker in Paris. He associated with Camille Pizarro and Paul Cézanne. However, as he took up painting full-time, Impressionism no longer satisfied him. 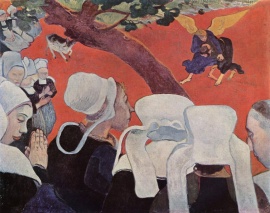 In 1886 Gauguin spent the summer at Pont-Aven in Brittany, which had long been established as an artists colony. Paul Gauguin lived there for several years in the 1880s and 1890s as the central figure of the colony, along with Paul Sérusier, Émile Bernard, Charles Laval, Édouard Vuillard, Pierre Bonnard, Maurice Denis, and many others. Gauguin ventured into the Cloisonism that was influenced by folk art and Japanese prints. Émile Bernard had pioneered this style of painting with strong outlines and flat areas of color, and Gauguin adopted it.

His painting, Vision du Sermon, or The Vision after the Sermon, Jacob Wrestling with the Angel, represents a transition into Cloisonism and beyond. Breton women are depicted watching a man wrestling with an angel - "presumably a shared vision of the sermon they have just head preached in church... The thrill of the painting lies in the tension between abstract and naturalist details, between the real and the mystical."[1]

It marks his final departure from Impressionism, a school of which he had never been fully part, and signals his creation of something entirely new. While the work had all the hallmarks of the recently defined Cloisonism, it already left it far behind. More than that, with its many layers of meaning, with its merging of biblical symbolism and personal mythology, the painting marks as great a break with the realist tradition as Seurat's Grande Jatte.[2]

Gauguin and the artists at Pont-Aven evolved toward what came to be called Synthetism, where form and color became more balanced. Their work came to be distinguished by subject matter like that of the Belgian Symbolists; lack of interest in realistic representation; and bold use of colors. Their intention was to combine images in new ways that were completely unlike Impressionism, and the synthesis was of the real and the imaginative.

Gauguin had a strong influence on a group of student artists who gathered at the Académie Julian, particularly in the use of color. Led by Paul Sérusier, they called themselves Les Nabis. Their main principle was that an artist worked in symbols and metaphors expressing his own nature.

[Gauguin's] 1888-1890 paintings from Brittany are generally seen as having provided a basis for the emergence of a more or less common Nabi style...

It is likely that Gauguin's Brittany period paintings encouraged Sérusier and his fellow incipient Nabis toward a mystical conception of art in which sacred geometry figured as one component.[3] 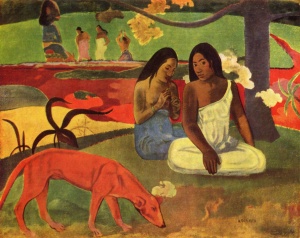 "Where Do We Come From?

In 1897 Gauguin painted a large work addressing the questions, Where Do We Come From? What Are We? Where Are We Going?

In Tahiti, he created paintings that express a highly personal mythology. He considered this work—created in 1897, at a time of great personal crisis—to be his masterpiece and the summation of his ideas. Gauguin’s letters suggest that the fresco-like painting should be read from right to left, beginning with the sleeping infant. He describes the various figures as pondering the questions of human existence given in the title; the blue idol represents “the Beyond.” The old woman at the far left, “close to death,” accepts her fate with resignation.[4]

In 1898 he sent the work to Georges Daniel de Monfreid in Paris. After a long series of consignments and sales, it ended up at the Museum of Fine Art in Boston in 1936. 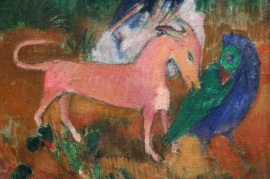 Gauguin moved to Atuona in the Marquesas in September, 1901. He bought a plot of land and built a sturdy two-story house in the town. With the aid of his fourteen-year-old native mistress, Vaeoho, and several servants, he established a household where he was able to be productive in his artistic life. The local residents were fascinated by the art in his house, and especially by the pornographic works that he had purchased in Egypt. The Roman Catholic missionaries in town were appalled, and Gauguin actively encouraged Marquesan children not to attend Catholic schools.

His paintings of this period were similar to those from Tahiti, but the subject matter tended more toward landscapes, and stills rather than the his previous themes of primitive life and lost paradise.

Gauguin's friend Paul Sérusier introduced many new ideas, such as Édouard Schuré's Les Grands Initiés, a study of world religions in which Christianity, Hinduism and Buddhism were given equal place. It was all part of the latest fad sweeping through French intellectural circles, the obsession with Theosophy..."[5] Various forms of esotericism were being explored in their circle of friends - Rosicrucianism, Freemasonry, spiritualism, and Kabbalah. Sérusier and the Nabis were drawn to the Rosicrucianism of Sâr Péladan and his Order of the Rose+Cross. Gauguin was more attracted to Theosophy:

What appealed to Gauguin was the suggestion of a single wisdom, a universal truth that could be glimpsed in its various cultural manifestations amongst differing world cultures... It was no accident that he had turned to a religious subject for his first major painting... Over the coming twenty years, the effects of Sérusier's enthusiastic sermons would grow and develop until finally, Gauguin's art would become the fullest expression of that belief in the oneness of mankind through a universal faith which Helena Petrovna Blavatsky had launched.[6]

Among Gauguin's French neighbors in Punaauia was Jean Souvy, who shared some of his intellectual interests:

The main interest Souvy held for Gauguin lay in his personal studies, he was a Theosophist, part of the spreading network launched by Madame Blavatsky, furnished with publications through the San Francisco branch of the Society. Throughout his retirement Souvy worked on a collection of thought on various philosophical and Theosophist topics which he entitled Cogitations... They reveal a mind running on lines close to Gauguin's, especially then, when his thoughts were once again turning to religious topics...[7]

The writings of Gerald Massey became important to the artist; he wrote out many pages of Massey's theories on the myth of Christianity into his notebooks.

The Union Index of Theosophical Periodicals lists 7 articles by or about Paul Gauguin.