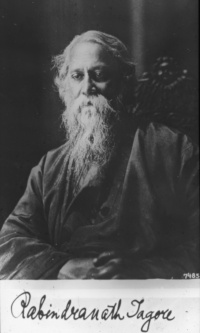 Rabindranath Tagore was a Bengali poet, painter, philosopher, and composer who was awarded the Nobel prize for literature. He was heavily involved with members of the Theosophical Society in England and India.

Rabindranath Tagore was born on May 7, 1861 in Kolkata, India. His father, Maharshi Devendranath Tagore, was a Hindu philosopher and reformer, active in the Brahmo Samaj. He established the guest-house called Santiniketan ("the abode of peace") in West Bengal, north of Kolkata.

Tagore died at the age of eighty on August 7, 1941 at Jorasanko Thakurbari in Kolkata. 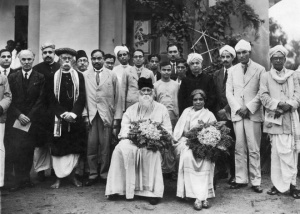 G. SUNDARI was born in 1929. She has had a lifelong association with both the Theosophical Society and Kalakshetra dance academy. She worked at Kalakshetra for 33 years, first as the "Superintendent of Studies," and later as the "Assistant Secretary of Performances" for over two decades.

My father came to Madras at the request of Annie Besant to work in the Theosophical Publishing House, and the rest of us followed when the Besant Theosophical School opened in 1934. I joined the school in Class I, and studied there till I completed my SSLC [Secondary School Leaving Certificate].

One of my earliest memories is of seeing Rabindranath Tagore during his visit to Madras in 1934. He was very impressive, with his ochre robes and his long beard. He had come with his students as part of his South India tour to raise funds for Shantiniketan. The president of the Society, George Arundale told him, ‘Gurudev, we don't want you to have to go around collecting funds at your age,' and assured him that they'd collect the money for him. So Tagore stayed on at the Society for about 10 days, and was well taken care of at the Blavatsky Bungalow near the big banyan tree.

All of us children would run in and out of the bungalow — there were no restrictions on our movements. Tagore would be reclining in an easy chair in the hall and when a child went up to him, his arm would go gently around him or her. But what fascinated us most was the sight of his students combing out his long beard! The Theosophical Society was in general a very child-friendly place. Dr. Arundale wouldn't pass by a child without a smile and a wave.[1]

A plaque commemorates his stay in the historic Blavatsky Bungalow from October 21 to November 2, 1934:

Tagore founded Visva-Bharati in his father's community of Santiniketan, which expanded into a university town. In 1951 Visva-Bharati was established as a national central university.

Besant Theosophical College is one of the oldest colleges in the Rayalaseema Region of Andhra Pradesh. The college started on 19 July 1915. (It was established decades before Sri Venkateswara University.) Initially it was affiliated to Madras University. In 1917 it was obliged to dissociate itself from Madras University and became part of National University. Dr. Rabindranath Tagore was the chancellor of the university.

In 1919, Tagore visited the college and during this time translated the lyrics of the Indian national anthem, "Jana Gana Mana", which he had previously written, from Bengali to English. Margaret Cousins (an expert in European music and wife of Irish poet James Cousins, then vice-principal of the college) set down the notation to the national anthem in the college, which is followed only when the song is sung in the original slow rendition style.

During Tagore's visit, the Scout Movement and All India Women Association were inaugurated at Madanapalle.