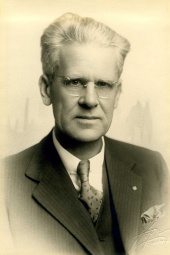 Captain Sidney Ransom was an English Theosophist and engineer who was married to Australian Josephine Ransom. He lectured all over the world. wrote articles, and was active in the Liberal Catholic Church.

Clara Codd, who was at Adyar during 1910-11, wrote that Captain Ransom contributed to the entertainment of Adyar society:

Captain Ransom was a conjuror, peeling eggs off himself in all directions, and even smacking his head and then producing one from his mouth. But he, too, had a second string to his bow. he could sing a lachrymose comic song about a baby on the shore. I remember there was a refrain about 'if you see the mother, tell her gently, yes gently, that we left her baby on the shore.'[1]

An electrical engineer by profession, Captain Ransom went to Adyar in the early part of this century, were he designed, erected and ran the electrical plant on the Headquarters estate. During the first World War, he was a technical officer in the Royal Air Force, and later served in administrative and educational work in aviation.[2]

Captain Ransom was a member of the Society for over 50 years.

He was a very popular speaker, and lectured extensively in England, Europe, the United States, and elsewhere. " In 1925, Captain Ransom toured the Australian Section and from 1929-1933, he was the first General Secretary of the Society in Central South Africa... For a time, he assisted with the editing of The Theosophical Review. Captain Ransom was also active in theosophical educational work in England and worked for the Liberal Catholic Church in both England and Australia.[3]

On June 8, 1935 he delivered the Blavatsky Lecture at the annual convention of the Theosophical Society in England at Conway Hall, London on the subject, "The Ethics of The Secret Doctrine." 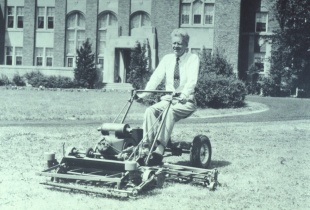 Theosophical work in the United States

In 1936-1937, Caption Ransom lectured and worked in the United States:

Captain Sidney Ransom has been our guest lecturer from England since September. While visiting us for a period of only nine months, I am glad to state that he has consented and has been able to arrange other responsibilities to stay with us for another full year. From reports received at Headquarters and from the numerous requests for return engagements, it is clear that Captain Ransom's visits have filled a need wherever he has worked in the Section. We are glad that parts of the Section originally omitted from his itinerary can now be included, that all may share the inspiration and the helpfulness, both public and in the lodge, which Captain Ransom so freely gives and which has been so much appreciated.

Captain Ransom has consented and the Board have approved his appointment as acting National President, and that of Miss Ellen McConnell as acting National Secretary in the place of your National Officers during the six weeks that they will be absent from the Section attending the World Congress at Geneva.[4] 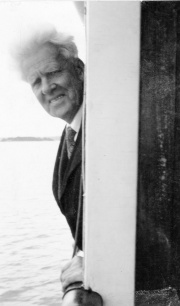 Sidney Ransom on a ship

As he departed for England, he was described in this way,

From New York to Florida, from the Atlantic Coast to the Pacific, he has traveled among our lodges, and by the magic of his loving kindness, the delight of his never-failing humor, and the strength of his courage and devotion he has warmed our heats and inspired members everywhere to live more nobly, and to see more clearly the vision of the greatness of work to which we are all dedicated. A genius in the high art of sincere and warm friendliness, Captain Ransom has helped us all to express the best in ourselves, and in lodge, in home, or in business to stand before the world wiser, truer representatives of The Theosophical Society to which we have the honor to belong.[5]

In late June, 1958, Captain Ransom sent a message to be read at the Annual Convention at Olcott, saying, in part, "I shall think of you often during your meetings, and while you are at meals. Most of you will know how very much I wish I could be with you." He passed away a few days later on July 5, 1958 "after an illness of some years."[6]

The Union Index of Theosophical Periodicals lists over 50 articles by or about Captain Ransom. Many were extracts or transcripts of his lectures, including these two booklets: