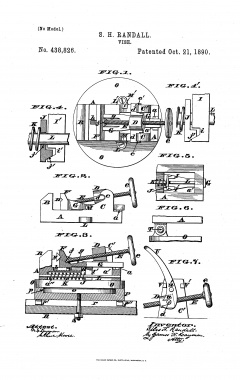 Silas Herbert Randall was a Cincinnati inventor and esotericist who corresponded with Thomas Moore Johnson and vigorously promoted Johnson's periodical The Platonist.[1]

Randall was born on July 31, 1852 in Mystic, Connecticut to Silas Burrows Randall and his wife Emily Doane Randall. The family included another son, James D. Randall and daughters Helen and Emily.[2] Sometime after the Civil War, they all moved to Cincinnati, Ohio, and Silas Herbert attended college there. By 1880, he had married Edith De Golyer and was established as a physician in Cincinnati. They had a daughter Jennie and son De Golyer.[3]

His father, Silas B. Randall, had worked for Perkins & Co. in 1872-1873, but in 1874 set up as a manufacturer at Randall & Co. He produced equipment used in harness-making. Both of his sons joined the business and stayed in the Cincinnati area for the rest of their lives. Silas H. Randall invented and patented new products, including a vise, harness maker's press, leather punching machine, leather creasing machine, bracket, crupper former, collar-stuffer, and stitching horse.[4] [5] However, Silas was not entirely happy with the financial aspect of the business. He wrote to Thomas Moore Johnson expressing frustration that he was unable to help with the expenses of Johnson's journal:

I regret exceedingly that your enterprise has been so disastrous to your finances, also my present inability to help you out of your difficulties. As the result of seven years labor for my father I have laid nothing by, and trouble on account of my wife's poor health and my insufficient income has sprinkled my hair prematurely with gray. I hope for a change, however, before long. Were I treated justly I would have now all the money I need. There is hardly a machine that my father makes that is not wholly my invention or at least has been greatly improved by me. If business were as good as it was 1 1/2 years ago my father would realize this year $3000 clear profit from two of my inventions alone. Had I been a worshipper of the dollar, I should certainly be independent to day. My father is incapacitated for business, so my brother and I attend to it, and he takes the profits, his apparent object being to leave behind him as big a pile as possible.[6]

Randall was heavily engaged with other esotericists in Cincinnati, including Dr. J. D. Buck, James Ralston Skinner, and Elmira Y. Howard. He was a voracious reader and student of a wide range of occult literature, and major support of The Platonist, distributing brochures and recruiting subscribers.

Silas ended the correspondence in 1886 due to his wife's objections to his H. B. of L. activity... Randall put a stop to his occult adventures when it became clear to him that his family life was at risk.[11]