James Ralston Skinner (1830-1893) was an attorney, freemason, and kabbalist from Cincinnati, Ohio who wrote books and pamphlets that were influential to early Theosophists.

Skinner was born in 1830 in Lockport, New York, the son of Josiah K. (or, in some accounts, Ithman) Skinner and Janette (variously spelled) Ralston Chase. His uncle was Salmon Portland Chase (1808-1873), who served as U.S. Senator from Ohio and the 23rd Governor of Ohio; as U.S. Treasury Secretary under President Abraham Lincoln; and as the sixth Chief Justice of the United States. The young man, called "Ralston" by his family, was invited to study law with Chase in Cincinnati; he also managed property for his uncle and worked in his law firm.[1]

In the 1850s he married Louisa Wiggins, daughter of a wealthy banker, Samuel Wiggins. They had a son Samuel, born around 1858, and a daughter Laura the next year.[2]

On November 18, 1862, he enlisted in the Union Army in the American Civil War. He served as Judge-Advocate-General in the Battle of Stone's River campaign under Major General Rosecrans, with the rank of major. He resigned his commission on March 20, 1865.

It is said that he temporarily lost his reason when a fellow soldier was decapitated by a cannon ball. In 1870 he was founding member of the Cincinnati Society of Natural History, with which he was active throughout his life. About this time, he began to write for the Masonic Review on the subjects that occupied the remainder of his years... . Skinner was initiated into McMillan Lodge No. 141 at Cincinnati, of the Grand Lodge of Free and Accepted Masons of Ohio, May 6, 1885.[3][4]

Before he turned 50, Skinner retired from his legal practice. At that point his family was distinctly well-to-do, and his household had five servants and substantial assets, according to 1880 census records.[5] He spent his remaining years writing, and passed away on September 2, 1893.[6] 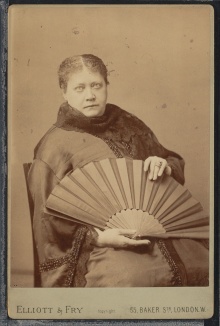 HPB note to JRS on her photograph

Connections with the Theosophical Society

H. P. Blavatsky was definitely aware of Skinner, and corresponded with him. Six letters and a photograph that he received from her are in a collection at Harvard University. A letter dated April 5, 1887 mentions that she will be sending him her photograph. On the back of the photo she wrote:

Skinner's writings on Jehovah were quoted in Blavatsky's book The Theosophical Glossary, with additional references to his ideas in The Secret Doctrine. However, he does not seem to have been a member of the Theosophical Society of which she was a Founder.

In the 1880s and 1890s, Cincinnati was a hotbed of activity. It was there that the Cincinnati Theosophical Society, one of the first American lodges, was founded by Jirah Dewey Buck on May 9, 1886, and later that year on October 30 the American Section of the Theosophical Society took form. The records of the Cincinnati lodge from 1878-1901 make no mention of Skinner as a member or lecturer, although there is one letter from Skinner to Buck dated September 4, 1887.[7] There is also evidence that Skinner participated in the life of the Cincinnati TS, at least by lecturing. In July 1887, The Path reported:

CINCINNATI. At a recent meeting of this Branch, Bro. J. Ralston Skinner *** read a valuable paper on Cycles of Time. On this subject Bro. Skinner is an authority.[8]

Buck mentioned in his book Modern World Movements some conversations with Skinner about the Hebrew language and correspondence with Madame Blavatsky. He also mentioned being present 25 years previously when Skinner took his third degree in the Masonic Lodge.[9]

In a letter to Buck, where Blavatsky tells him "I lost Mr. Skinner's address so please pass him on this enclosed volume," she states:

He is the grandest man & mind (in the direction of the occult) I know of at present; a natural born genius & helped beyond any doubt. I don't say "helped" mind you, in discovering in his independent research what he has, but helped from the lethal effects & influences of his discoveries. He would have become, uninitiated as he is, insane long ago, or dead or strangled at night under the pretext of an apoplexy – had it not been for the helping & watching hand above him; not of one of our masters but of a Dhyan Chohan, a Planetary - the rarest thing possible, & whom I verily fear he mistakes for God instead of a god-partie & conditioned on his plane. This I know from masters who spoke of him when I was yet at Adyar, referring to him as the "Ohio-Kabbalist & mathematician" – & that I had never heard his name even. Funny I should have never heard of him or his book when in America. His intuitional powers are as marvelous as his mathematical knowledge, indeed.[10]

These books and pamphlets are listed in order of first publication.

He wrote for Masonic publications, and also two articles that appeared in Theosophical journals: