The branch was formed on May 9, 1886 at the home of Dr. J. D. Buck on Oak Street. The founders of the group stated a desire "to place ourselves in Accord, and Association, with the Parent Society, now located and established at Adyar, Madras, India, and with other branches in Europe and America."[1] At that point there was no national organization of Theosophists in the United States, so Cincinnati affiliated directly with Adyar.

In June, The Path described the early days of the lodge:

The new Branch here has been organized since our last issue, with about twenty members. Some meetings have been held at which great interest was manifested. At the next meeting an essay upon some theosophical subject will be read. The members are all engaged in serious study of such subects as: the laws of Karma, Reincarnation, &c.[2]

The group was very active and dedicated, studying The Secret Doctrine weekly for at least thirteen years. 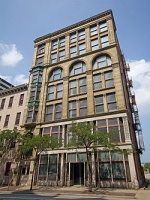 In 1893, the group rented the seventh floor of the new Goodall Building, 324 W. Ninth Street, and established the Theosophical Hall that was used for public lectures. The dedication of the hall was honored by a visit from William Quan Judge, the Vice President of the international Theosophical Society; Annie Besant, then editor of Lucifer magazine; and Professor Ganandra Nath Chakravarti, who were on their way to Chicago for the World's Parliament of Religions. The lodge provided this account that was published in The Path:

CINCINNATI T. S. is now located in one of the modern office buildings of Cincinnati. It occupies the entire seventh floor of the new Goodall Building on Ninth street opposite the new City Hall. The seventh floor has been undivided, and thus a large hall, with windows on three sides, has been secured. It will seat with the present number of chairs about two hundred and fifty people. In one corner of the room is a doorway leading to a small room used as a library. Large double doors open from the hall and elevator landing into the assembly room. On Saturday night, September 9th, the rooms were crowded with invited guests to witness the dedication of the new rooms to Theosophical work. The President, Dr. J. D. Buck, occupied the chair, and on the platform beside him were Annie Besant, Bro. Chakravarti, and Bro. Judge. Dr. Buck made a few remarks and introduced Bro. Judge, who spoke of the T.S. and its work. Then Bro. Chakravarti spoke of Theosophy in India, and Annie Besant closed with eloquent remarks on the duty of members to the local branch. The following Sunday and Monday Mrs. Besant lectured in the Pike Opera House to audiences composed of the thinking people of Cincinnati and vicinity. The Cincinnati T.S. has planned a series of Tuesday evening lectures, essays, and readings, to occupy the time from now until June, 1894.[3]

The Cincinnati group and especially Dr. Buck played a major role in establishing the American Section of the Theosophical Society when he chaired a convention held in his home on October 30, 1886.[5]

In 1895, when most branches (lodges) of the American Section voted to separate from the parent society in Adyar, the Cincinnati group also voted to follow William Quan Judge into establishment of a new national organization.