The Ocean of Theosophy (book) 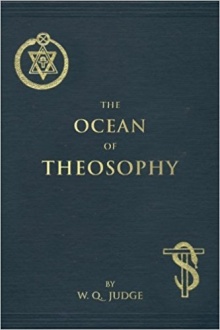 The Ocean of Theosophy by William Quan Judge is one of the best-written and most-read books about the basic tenets of Theosophy.

The need for a simple, concise statement of Theosophical teachings was met by Mr. Judge with publication of this book in 1893. It first appeared as a series of newspaper articles, in which the writer set forth all the major doctrines of the philosophy, dealing with questions that might naturally occur to the average reader. Years of experience in the use of the Ocean as a text in Theosophical study classes have proved it a provocative approach to the Theosophical philosophy as a whole.[1]

Organization of the book

The simple and logical organization of this volume makes it easy for the reader to locate topics of interest.

Numerous editions and printings of Judge's masterwork have been issued, and it has been continuously in print since May, 1893. This book has also been translated into Spanish, French, and several German editions. These are the most prominent editions:

Selections from The Ocean of Theosophy have been frequently printed in periodicals, and also in this volume:

One of the earliest reviews of this book was in Lucifer, then edited by Annie Besant:

We have received from the Path office one of the most useful little books for enquirers that we have seen. It is divided into seventeen chapters, each dealing with some salient point in the Esoteric Philosophy. Beginning with “ Theosophy and the Masters,” Mr. Judge proceeds to sketch out “ General Principles,” and then takes the principles up in detail. After a chapter on “ The Earth Chain,” man’s “ Septenary Constitution” is dealt with in four chapters, marked by clearness of definition and of language. Then comes “ Reincarnation,” with explanation of its meaning, answers to objections, and arguments in its support. “ Karma” follows naturally on this, and then Death’s threshold is crossed, and Kama Loka and Devachan are studied. The important subject of cycles is then elaborated, and next comes a useful chapter on differentiation of species and missing links. Two chapters on psychic laws and phenomena bring the book to a conclusion. This little volume forms the most concise and clear statement of Theosophic teachings yet given to the world, and we heartily commend it to all who are seeking for an elementary book to place in the hands of the would be student. It is just what is wanted, and Mr. Judge has added one more to the many services he has done to the Theosophical movement. [2]

A review by Alexander Fullerton appeared in The Path:

Mr. William Q. Judge’s Ocean of Theosophy was issued early in June. It is a very neat book of 154 pages, printing and binding excellent. Its great merit is the extraordinary number of Theosophical topics compactly brought together in so small a space, the analyzed Table of Contents of the seventeen chapters being astonishing. A Preface of one page states in the most straight-forward way why certain subjects receive no treatment and why a tone of conviction as to others is used, but disclaims either authority or originality, proclaiming that no reader is a less good Theosophist because he disagrees from some positions, and that the book but hands on matter taught to the author and verified to him. Very many questions uprising as the student advances in reading receive here a clue to settlement, and he cannot but perceive that the book has behind it a lengthened tuition and a nearness to teachers which impart a very different quality from that in ordinary Theosophical literature. And it is entirely possible that the passages which do not now secure assent may do so in measure when readers shall have reached the stage of the author. At all events, it is well to see them thus presented and so strong an impulsion given to thought on topics of such moment and influence. Nobody can read the work without being instructed, and few can read it once without the purpose to do so again. A misprint on page seventy of "years ago” for “A. D." wrongly dates the Council of Constantinople, but the correct date is given on page sixty-four. (The Path; cloth $1.00, paper 50 cents.)[3]

Colonel Olcott clearly read The Ocean very attentively. He voiced a few criticisms of the text, such as that A. P. Sinnett was wrongly stated to be an official in the Government of India, but also offered praise:

The production of this interesting little volume amid the great pressure of his current literary and official duties, is another proof of Mr. Judge’s tireless activity and commercial enterprise. Like all the issues from his printing-office, it is faultless in print and paper, and excellent in binding; far and away beyond anything we can do at Madras. The author has given us a succinct compendium of the body of doctrine which has been H. P. B. ’s legacy to posterity, and presented it in a flowing style...[4]

THIS is a most welcome addition to Theosophic literature. It is a clear, comprehensive exposition of Theosophy from the pen of one who is evidently a master of his subject. Its style is that of lucid concentration; a world of information being often conveyed in a few sentences. As a key to the Secret Doctrine, it is invaluable to those who have not the time or intuitive power to synthesize into orderly sequences the cyclopedic contents of that magnificent work of the Masters. One of its chief merits, aside from that just indicated, consists in its plain statements of the tenets of Theosophy in simple, but strong, English. There is no attempt at literary affectation, no display of mere pedantry, no resort to Sanscrit terms, so often done by tyro Theosophists or shallow thinkers to conceal their ignorance of the subject they are attempting to explain. English is a strong, beautiful language, and in the hands of Mr. Judge demonstrates its capacity to express the subtlest metaphysical distinctions. Only those Sanscrit terms are used for which our materialistic thought has evolved no synonyms, and these are fully explained. The scope of the work covers the entire Theosophic conception of man's origin, relation to nature, and destiny... Altogether the book ranks next to the Secret Doctrine and Key, and is indispensible to every true student of Theosophy.[5]

In the July, 1903 issue of The Theosophical Quarterly:

Perhaps this book comes closer than any other to being the always desired and never attained treatise on Theosophy, to give to inquirers.[6]

Study of The Ocean of Theosophy