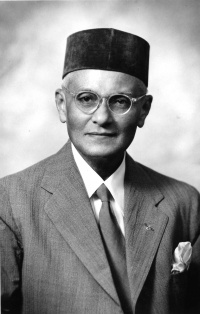 Curuppumullage Jinarājadāsa (16 December 1875 – 18 June 1953), was a Sri Lankan scholar, lecturer, and writer who served as the fourth President of the Theosophical Society based in Adyar, Chennai, India from 1945 to 1953. An accomplished linguist, he traveled extensively for fifty years as an international lecturer, speaking in English, French, Italian, Spanish, and Portuguese. He was known to his wide circle of friends as "Raja", "Brother Raja", or "CJ". 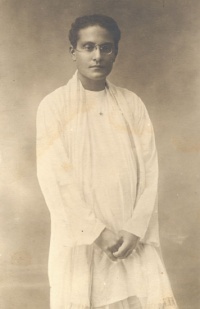 Mr. Jinarājadāsa was born on December 16, 1875 in Ceylon (now Sri Lanka) of Sinhalese Buddhist parents in a town about fifteen miles (24 km) south of the capital city, Colombo. The name Curuppumullage indicates a person "Curuppu" living in the house or town of Mullage. The surname Jinarājadāsa can be interpreted in various ways, but is a combination of three words: jina (winner), raja (king), and dāsa (servant).

His association with Theosophy began at the age of thirteen when, as one of the first students of Ananda College, he met C. W. Leadbeater. The following year, A. P. Sinnett asked Mr. Leadbeater to return from India to England to tutor his son Denny and George Arundale, Leadbeater brought Raja with him. The three boys were close in age: Raja was born in 1875, Denny in 1877, and George in 1878.

In 1889, Jinarājadāsa met Madame Blavatsky for the first time. He became a member of The Theosophical Society on March 14, 1893 through the London Lodge. He entered St John’s College, Cambridge in 1896, and four years later took his Degree in the Oriental Languages Tripos, and also studied Law. He then went back to Ceylon where he became Vice-Principal (1900-1901) of Ananda College in Colombo. In 1902 he returned to Europe to study literature and science at the University of Pavia, Italy. In 1904 he went to America, where he began his career as an international lecturer of the Theosophical Society, speaking in English, Spanish, Italian, and Portuguese.

During the administration of Annie Besant, Brother Raja served as Vice President of the Society, from 1921 to 1928.

Mr. Jinarâjadâsa Took office as President of the Society on February 17, 1946 and served until 1953, when he resigned due to illness.

In 1949 Jinarâjadâsa founded the School of the Wisdom at Adyar, for the study of Theosophical teachings in depth as given in the textbooks, but primarily because a student knowing these things could with widened vision ‘sit in the centre’ of his own being and ‘enjoy clear day’ in his understanding of the world of men and affairs. The School was also to devote its studies to the thoughts of the great and the affairs of men in the larger sense through historical time. Its yearly sessions attract students from several countries to this day. He tried to make the Headquarters once more a centre for students and gradually reorganized the estate for that purpose. Jinarâjadâsa could always present his thoughts with clear and delicate appreciation of the pictures his words would create in the minds of his readers.[1] 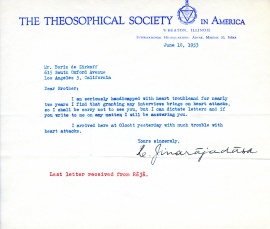 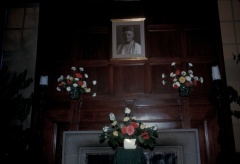 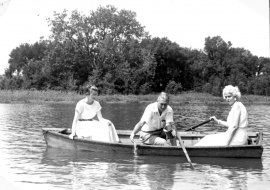 The strains of his travels took a toll on his health. In a letter to James Perkins he wryly commented on the hot climate of Adyar, India:

If only Adyar would cool off 20° between day and night we would manage quite well. As to my stay in Bangalore, the one who worked hardest was Elithe [Nisewanger, his secretary], because I gave several lectures and talks and she took them all down. The skin irritation stopped with 10° cooler than Adyar, but by compensation to equalize karmic debits, knees and particularly my left shoulder (I am left handed) got going. However, all these ups and downs are part of the order of the day.[2]

In 1953, suffering from diabetes and heart disease, Mr. Jinarājadāsa resigned from the presidency of the Society after one term in office. He was the only President who declined to stand for re-election, and in February of that year Nilakanta Sri Ram became his successor.

CJ had committed to a lecture tour of the United States. When he reached the headquarters of the American Section, he became ill. On June 10th he wrote a final letter to his longtime friend Boris de Zirkoff describing his heart attacks. Despite the earnest efforts of the staff to help him, Mr. Jinarājadāsa passed away on June 18, 1953. A memorial service was held in the library, and his some ashes were scattered on the Fox River by James S. Perkins, Kathrine Perkins, and others. Ashes were also placed in the Garden of Remembrance in the 1990s.

He loved children, the sea,
Beethoven, Wagner’s Ring, the
Hallelujah Chorus, and his
Gospel was Ruskin.[3]

Articles are indexed in the Union Index of Theosophical Periodicals. Over 1600 articles are listed under the name Jinarājadāsa.

Searching under CJ will result in a list that includes work by Charles Johnston, a Sanskrit scholar who was married to Madame Blavatsky's niece, and who was also known by those initials. Within the results list, the articles by Mr. Jinarājadāsa will include those in the periodicals: The Adyar Bulletin, The American Theosophist, The Australian ES Bulletin, The Herald of the Star, The Messenger, Sishya (The Student), The Theosophic Messenger, The Theosophist, and World Theosophy. Articles by Charles Johnston appear in Theosophical Quarterly, Theosophy, The Path, and The Irish Theosophist.

In 1913, Mr. Jinarājadāsa was awarded the Subba Row Medal for his contribution to Theosophical literature. A grove was planted at the Olcott campus with a plaque and stone bench.