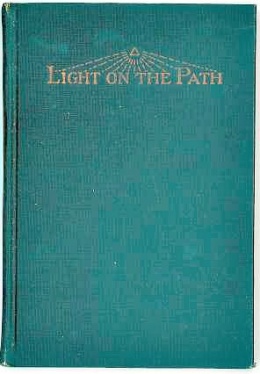 Master Hilarion is said to served as a conduit in the writing of Light on the Path, as the rules came "not from the Master Hilarion but through him from the far distant past."[1] He further contributed the commentaries on the stanzas that are included in the published work. In an analysis by John Hamaker, Collins' book gives evidence of the influence of the fifth ray on the Theosophical Society. The fifth ray is identified with the human impulse toward learning that is manifested in organized science. Hilarion was "leader and teacher of the group of souls whose line of progress lies through the quality that is the fifth ray..."

In Light on the Path we catch a glimpse of the fifth ray... the presence of the spirit of science can clearly be discerned. The first thing we see is the presence of a well defined structure. We are impressed by the simplicity and economy of both its structure and its language. In this is a beautiful expression of the way of science, in as much as science truly is the art and specialty of creating forms of the stuff of the mind." [2]

A.B. This treatise falls naturally into certain divisions. It was given to the Western world by the Master Hilarion, one of the great Teachers belonging to the White Lodge – a Master who played a great part in the Gnostic and Neoplatonic movements, one of the great persons who made attempts to keep Christianity alive. His incarnations have run very much in Greece and Rome, and He takes special interest in guiding the evolution of the Western world. He obtained the book as we have it, without the notes, from the Venetian Master, one of the greater Teachers whom H.P.B. spoke of as Chohans.

Fifteen of the short rules that you find in the first part of this book, and fifteen in the second part, are exceedingly old, and were written in the most ancient Sanskrit. To these short sentences which are used as a basis for the instruction of the disciple, the Chohan added other sentences, which now form part of the book, and are always to be read along with them, to supply complementary ideas without which the reader may be led astray. All the rules in both parts of the book, except the thirty short aphorisms, were written by the Chohan who gave it to Master Hilarion. The following table shows the fifteen short rules in Part I as they existed in the exceedingly ancient manuscripts; the number at the beginning of each is the original one, but the number at the end is that which appears in the modern book.

It will be noticed from the above table (which covers only Part I of this book) that rules 4, 8, 12, 16, 20 and 21 are absent from the list. That is because they do not belong to the most ancient part of the book. Those rules and the preliminary and concluding comments are the portion added by the greater One who gave it to the Master. In addition there are notes, which were written by the Master Hilarion himself. The book as originally published in 1885 contained these three portions: the aphorisms from the ancient manuscript, the additions of the Chohan, and the notes of the Master Hilarion. All these were written down by Mabel Collins, who acted as the physical instrument, as the pen that wrote it. The Master was Himself the translator of the book, and He impressed it upon her brain. His was the hand that held the pen. Then there subsequently appeared in Lucifer under the title of “Comments” a few articles which were written by Mabel Collins under the influence of the Master, and which are exceedingly valuable, worth reading and studying. [3]

C.W.L. As we have it at present it was dictated by the Master Hilarion through Mabel Collins – a lady well known in Theosophical circles, who at one time collaborated with Madame Blavatsky in the editorship of Lucifer. The Master Hilarion had in turn received it from His own Teacher, the Great One who among Theosophical students is sometimes called the Venetian. But even He was the author of only a part of it. It has passed through three phases; let us set them down in order.

It is but a small book even now, but the first form in which we have seen it is smaller yet. It is a palm-leaf manuscript, old beyond computation; so old that even before the time of Christ men had already forgotten its date and the name of its writer, and regarded its origin as lost in the mists of prehistoric antiquity. It consists of ten leaves, and on each leaf are written three lines only, for in a palm-leaf manuscript the lines run along the page, not across it as with us. Each line is complete in itself – a short aphorism – and the language in which they are written is an archaic form of Sanskrit.

The Venetian Master translated these aphorisms from Sanskrit into Greek, for the use of His Alexandrian pupils, of whom the Master Hilarion was one, in His incarnation as Iamblichus. Not only did He translate the aphorisms, but He added to them certain explanations, which we shall do well to take along with the original. For example, if we look at the first three aphorisms, we shall see that the paragraph marked 4, which follows them, is clearly intended as a commentary on them; so we should read it thus: “Kill out ambition; but work as those work who are ambitious. Kill out desire of life; but respect life as those do who desire it. Kill out desire of comfort; but be happy as those are who live for happiness.”

In the same way rules, 5, 6 and 7 form a group, followed by 8, which is a comment by the Chohan – and so on far into the book. These groups of three are not put so by mere coincidence, but intentionally. If we examine them we shall find that there is a certain bond between the three in each case. For example, the three rules grouped together above point to purity of heart and steadiness of spirit. One may say that they indicate what the man must do with himself, what is his duty to himself in the way of preparation for work.

The second set of three aphorisms (numbers 5 to 8) states that we are to kill out all sense of separateness, desire for sensation, and the hunger for growth. They indicate man’s duty to those around him socially. He must realize that he is one with others. He must be willing to give up selfish and separate pleasures. He must kill out the desire for personal growth, and work for the growth of the whole.

In the next set of three (numbers 9 to 12) we are told what to desire – that which is within us, that which is beyond us, and that which is unattainable. These are clearly a man’s duty to his Higher Self. Then follow aphorisms (13 to 16) on the desire for power, peace and possessions. Those are all desires which fit us for the work of the Path. The next group of rules (17 to 20) tell the aspirant how to seek the way.

The rules now numbered 4, 8, 12, etc., are explanations and amplifications by the Venetian Master. They, with the original aphorisms, formed the book as it was first published in 1885, for the Master Hilarion translated it from Greek into English and gave it in that form. Almost immediately after it was printed. He added to it a number of most valuable notes of His own. For that first edition those notes were printed on separate pages, the backs of which were gummed so that they might be attached at the beginning and the end of the little book which bad just passed through the press. In further editions, those notes have been inserted in their appropriate places.[4]

C.W.L. [The chapter on Rule 21 indicates a statement by the Venetian Master, followed by additional sentences by the Chohan and Master Hilarion's notes.] The Chohan then concludes Part I with the words: These written above are the first of the rules which are written on the walls of the Hall of Learning. Those that ask shall have. Those that desire to read shall read. Those who desire to learn shall learn. Peace be with you ∆[5]

PART II C.W.L. - The second part of Light on the Path assumes that the student has passed the First Initiation; it carries the man on through the steps of the Path leading up to the Adept level. But a second and higher interpretation of it begins beyond that, and helps to guide the man who has already become an Adept on to His next stage.... [There is an] introduction to this second part, written by the Venetian Master....[followed by paragraph written by the] Chohan [who] goes on to remind the student of his qualifications...Then comes a long note by the Master Hilarion, and we can see at once from looking at that note that He is dealing with the whole matter very differently in this second part. Before, He gave us what we might call a general comment upon what was said; here He explains practically every word of the text, so that evidently He regards this as something much more difficult to understand, requiring explanation rather than mere comment.[6]

C.W.L. - In the last chapter we considered what is really a preface to the second part of the book, but now we come to the rules. Up to Rule 12 these are numbered in the same manner as in Part I: Rules 1 to 3, 5 to 7, and 9 to 11 belong in sets of three to the ancient palm-leaf manuscript, and Rules 4, 8 and 12 are comments by the Chohan. Further on the numbering follows a different plan.[7]

C.W.L. - At this point in Part II of Light on the Path the numbering of the rules undergoes a change. We have no longer sets of three aphorisms from the old manuscript, followed by a comment by the Chohan. Rule 13, to which we have now come, is given by the Chohan.[8]

C.W.L. - Rule 14 is once more a comment by the Chohan, not so much upon what has gone before as in preparation for another set of three aphorisms, which are numbered 15, 16 and 17.[9]

This book has been published with the subtitle "a treatise written for the personal use of those who are ignorant of the Eastern wisdom, and who desire to enter within its influence." Exceptions are noted.