Difference between revisions of "Seth Pancoast" 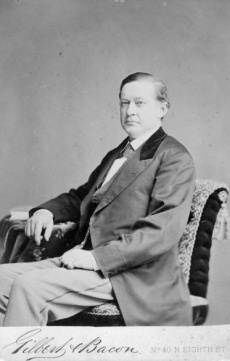 Seth Pancoast was born to Stephen and Ann Pancoast in Darby, Pennsylvania on July 28, 1823.[1][2] His was a Quaker family; he was descended from one of three Pancoast brothers who accompanied William Penn in establishing the colony of Pennsylvania.[3]

After a classical education, Pancoast engaged in business in 1843, and then studied medicine at the University of Pennsylvania. He was graduated in 1852. The new doctor became a professor of anatomy in a "female college" in 1853, and the next year was named a professor of "Microscopic Anatomy and Physiology" at the Institute of Medicine at Penn Medical University in Philadelphia.[4][5] After five years he entered private practice and was given emeritus status. He wrote medical books and articles, including one on the therapeutic qualities of the light spectrum.

He was apparently married three times, to Sarah Saunders Osborn, Susan George Osborn, and finally, Carrie. Pancoast had at least five daughters and one son. The son, Henry Khunrath Pancoast, was born on February 26, 1875. His name must be a tribute to the great German alchemist Heinrich Khunrath (1560–1605) [6]

Dr. Pancoast's personal library was described as "the finest private collection of works on the occult sciences in the United States."[7] One of the books was Cabala, Speculum Artis Et Naturae, in Alchemia printed by Andrea Erffurt in Augusburg Germany in 1654.[8]

He died on December 16, 1889 of heart disease and was buried in the Darby Friends Cemetery in Philadelphia.[9][10]

Seth Pancoast does not seem to be closely related to another early member, Benjamin Franklin Pancoast, a tinsmith in Cambridge, Massachusetts who joined the TS in Boston on May 12, 1894.[11]

Col. Olcott described Dr. Pancoast as "a most erudite Kabbalist". The doctor was present at the meeting of September 7, 1875, that eventually led to the forming of the Theosophical Society.[12][13] Although his name is not among the sixteen people that the next day met to form the Society, he was elected as Vice-President on the meeting held on October 30, previous to the inaugural one on November 17.[14]

DR. SETH PANCOAST, of Philadelphia, was a theistic mystic and a great alchemist... He was present at Felt's lecture and questioned him closely. H.P.B. always spoke with great respect of his erudition. But when it came to putting theory to the test by evoking the unseen elemental races which guard the threshold of knowledge, he confessed he lacked courage, though H.P.B. frequently offered to assist in the ceremonies and, if necessary, face the worst of the phantoms alone. Under the names of "Lex" and "Lex et Lux" he wrote for the Spiritualistic papers on kabalistic and other matters. He remained a member till he passed away in 1889.[15]

He was among the Theosophists present at the cremation of Baron de Palm.

In 1875 Dr. Pancoast calculated the return of the seventh cycle of Trithemius in 1878, announcing that if the calculation were correct there would be a revival in theosophy and other occult studies, which has since occurred. His work was merely a prelude to a much larger one, which is now (1888) approaching completion. The formulation of the latter has required twenty years' search and selection through ancient works in European libraries.[16]

Dr. Pancoast's writings were erudite and well-researched. His book The Cabala was "the first book on the subject in the English language," according to Appleton's Cyclopedia, 642. He wrote two articles for The Path, according to the Union Index of Theosophical Periodicals.