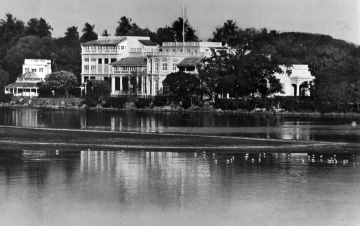 The Theosophical Society based in Adyar, Chennai, India, is an international organization dedicated to the principles of Theosophy. More information is available on its website. 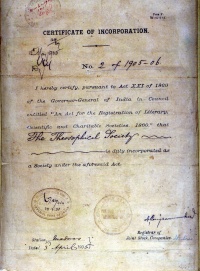 The Theosophical Society was formed at New York on November 17, 1875 by Helena Petrovna Blavatsky, Henry Steel Olcott, William Quan Judge, and other founders. On April 3, 1905, it was incorporated at Chennai (Madras). Today the International TS has members in almost 70 countries around the world.

The Society was influential in the founding of many later esoteric movements, a number of which were founded by former TS members. Some notable cases are Dr. Gerard Encausse (Papus), founder of the modern Martinist Order; William W. Westcott, co-founder of the Hermetic Order of the Golden Dawn; Max Heindel, founder of The Rosicrucian Fellowship; Alice Bailey, founder of the Arcane School; Rudolf Steiner, founder of the Anthroposophical Society; the Russian painter Nicholas Roerich and his wife Helena, founders of the Agni Yoga Society; Guy and Edna Ballard, founders of the "I AM Movement"; among others.

No acceptance of particular beliefs or practices is required to join The Theosophical Society. All in sympathy with its three declared Objects are welcomed as members, which are:

Any person in sympathy with the three Objects can join the Theosophical Society. The Society maintains the right of individual freedom of thought for every member, and nobody is asked to give up the teachings of their own faith, if they have any. To ensure this right, the General Council of The Theosophical Society passed the following resolution in 1924:

As the Theosophical Society has spread far and wide over the world, and as members of all religions have become members of it without surrendering the special dogmas, teachings and beliefs of their respective faiths, it is thought desirable to emphasize the fact that there is no doctrine, no opinion, by whomsoever taught or held, that is in any way binding on any member of the Society, none which any member is not free to accept or reject. Approval of its three Objects is the sole condition of membership. No teacher, or writer, from H.P. Blavatsky onwards, has any authority to impose his or her teachings or opinions on members. Every member has an equal right to follow any school of thought, but has no right to force the choice on any other. Neither a candidate for any office nor any voter can be rendered ineligible to stand or to vote, because of any opinion held, or because of membership in any school of thought. Opinions or beliefs neither bestow privileges nor inflict penalties. The Members of the General Council earnestly request every member of the Theosophical Society to maintain, defend and act upon these fundamental principles of the Society, and also fearlessly to exercise the right of liberty of thought and of expression thereof, within the limits of courtesy and consideration for others.

Freedom of the Society

As every individual member of the Society is free to hold his (or her) own views and beliefs, and to follow their own practices, no one can impose their particular views or aims on the Society, which has its own declared Objects. To ensure this freedom of the organization, the General Council of The Theosophical Society passed the following resolution in 1949:

The Theosophical Society, while cooperating with all other bodies whose aims and activities make such cooperation possible, is and must remain an organisation entirely independent of them, not committed to any objects save its own, and intent on developing its own work on the broadest and most inclusive lines, so as to move towards its own goal as indicated in and by the pursuit of those objects and that Divine Wisdom which in the abstract is implicit in the title, The Theosophical Society. Since Universal Brotherhood and the Wisdom are undefined and unlimited, and since there is complete freedom for each and every member of the Society in thought and action, the Society seeks ever to maintain its own distinctive and unique character by remaining free of affiliation or identification with any other organisation.

These are the presidents since the 1875 founding of the Society:

Each year in December, the Society holds its annual convention. The General Council meets, and members from around the world gather to hear excellent lecturers.

School of the Wisdom

Holidays and other celebrations

The grounds are open twice daily for residents of Chennai who register as "walkers." In this way, members of the general public can enjoy the beauty and serenity of the campus.

The Theosophical Society publishes books, periodicals, pamphlets, and reports through its publishing arm, Theosophical Publishing House, and the Vasanta Press. The official journal of the organization is The Theosophist.

Each year the Society produces an General Report of the Theosophical Society that provides a statement by the President, financial statements, reports from each of the national sections, and other information. A copy is sent to the General Secretary of each national section and to other members of the General Council, but this publication is not sold to the general public.

These organizations were founded by TS members, and are part of the fabric of the Theosophical Society as a whole. Most are separate legal entities such as not-for-profit corporations, and as such are subject to local or national regulation. Governance may be in the form of boards or committees; officers, staff members, and other participants are predominantly members of the Society.

These organizations came into being through the efforts of TS members, but have missions, membership, and organizational structures that are completely separate from the Society.