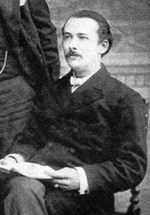 Herbert A. W. Coryn (1863-1927) was a member of the early Theosophical Society and a prominent supporter of Helena Petrovna Blavatsky. During the late 1880s and early 90s he was the president of Brixton Lodge in South London and also a member of Blavatsky's Inner Group. In 1893 he was one of the Theosophical representatives at the World's Parliament of Religion in Chicago. In 1895, during the conflict between William Quan Judge and Annie Besant, he sided with Judge and was eventually expelled from the Theosophical Society based in Adyar, India. In 1900 he relocated from England to Point Loma, California where he supported the efforts of Katherine Tingley until his death.

Born in England in 1863, Coryn was the son of a physician. He followed in his father's footsteps studying medicine and becoming a member of the Royal College of Surgeons, London. Initially he worked at his father's medical practice.[1] He had three siblings, an older sister, Francis (1856-1927), married to Professor Fred J. Dick, and two brothers, Sidney and Edgar A., all active Theosophists.[2]

He joined the Theosophical Society in the late 1880s when Blavatsky had relocated to England. He immediately became one of her direct pupils and was fiercely loyal to her and the other early members of the Society, including William Quan Judge. When Blavatsky established her Inner Group, he was one of the twelve members.[3] Dr. Coryn was in medical practice with another of the group, Dr. Archibald Keightley.[4] In 1890, when Blavatsky declared herself president of the Theosophical Society of Europe, he was appointed to her advisory council.[5] During Blavatsky's life he also held other positions including the Secretary of Theosophical Lecturing Society.[6] After Blavatsky's death Coryn became a member of the Executive Committee in the European section, a position he held until 1895.

He was also the president of Brixton Lodge in South London, a position he held from 1890 until the lodge was dissolved in 1895. The lodge, founded on April 18, 1890,[7] met in a small hall in the back of 196, Clapham Park Road, not far from the Clapham Road station.[8] The Lodge also attracted a number of prominent English occultists and Theosophists to lecture including Allan Bennett whom Coryn co-sponsored for membership,[9] and G. R. S. Mead.[10] Coryn also lectured on subjects such as through transference.[11] In addition to lectures, the lodge also hosted classes on The Secret Doctrine, developed a Girl's Guild, "giving an opportunity for the self-improvement to any young [people],"[12] and a lending library.[13]

During the 1893 World's Parliament of Religion at the World's Colombian Exposition in Chicago, Coryn is listed in attendance, as the president of Brixton Lodge, and on Judge's Advisory Council.[14]

In 1895, an internal conflict within the Theosophical leadership emerged. Various accusations were made against Judge claiming that he forged letters from the Masters. Against Judge, making the accusations were Annie Besant and H. S. Olcott. Details of the conflict emerged in a number of publications, many of them Theosophical. One of the primary calls was for a detailed investigation in the matter and for Judge to step down from his position as Vice-President of the Theosophical Society. At the end of 1894, beginning of 1895, Dublin Lodge, of Dublin, Ireland, began circulating a statement of support for Judge. The Lodge was run by Fred J. Dick, the brother-in-law of Coryn and a former close student of Blavatsky's. By 1895, The Vâhan begins to mention the circular and T.S. members begin writing into the journal to discuss it.[15] In his position as the president of Brixton Lodge, Coryn led a vote at the lodge where the members passed a resolution supporting Judge in February 1895. The resolution read:

1. That this Lodge requests William Q. Judge not to resign from the office of Vice-President of the T.S., it being imperative for the best interests of the Society that he shall remain in the said office for the successful promulgation of Theosophy in America, and generally.


2. That in the opinion of this Lodge there is no necessity for the further investigation of the charges made against William Q. Judge.
3. That the Lodge expresses its fullest confidence in William Q. Judge personally, and as an official of the T.S., and also in his methods of work, and declares its determination to support him in his efforts therein.

In the previous issue of The Vâhan, Coryn submitted a letter supporting Judge, those who support Judge, and takes issues with how Judge supporters are characterized and labeled. He and many of Brixton Lodge members also affix their names in support of the Dublin Lodge Circular.[17] Subsequent issues demonstrate that Coryn was an active participant in the debate regarding the accusations against Judge. The conflict came to a head when in July 1895, the American section of the Theosophical Society seceded and formed their own organization led by Judge. In the August 1895 issue of The Vâhan, G.R.S. Mead lists the lodges that were allied with Judge and were thus dissolved. He writes, "The following Lodges, therefore, unless they repudiate the action of their representatives, are no longer Lodges of the Theosophical Society: Dublin, Bow, Brixton, Croydon, Southport, H.P.B., Earl's Court, Charleroi and Yarm."[18] Britxton lodge did not repudiate its leadership. In fact, the lodge took the significant step of declaring independence. In The Path, the Theosophical Journal of the American section of the Theosophical Society, posts the following notice: 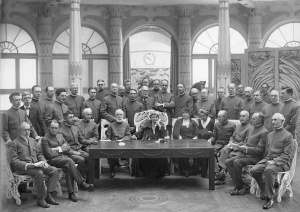 Parliament of Peace Committee, Temple of Peace, Point Loma, California 1923. Coryn is seated in the second chair from the left, crossing his arms and legs.

Coryn's efforts in England did not last. By mid-1898, he had relocated to the United States, and lived in New York, the place where the T.S. headquarters were located. Upon arriving he immediately took a leadership role in Katherine Tingley's organization taking on the role of secretary in the International Brotherhood League (Unsectarian) which was founded by Tingley on April 29, 1897, and as a member of the general committee of the War Relief Corps of the I.B.L.,[24] after the onset of the Spanish-American War in Cuba. "The committee coordinated the accumulation and distribution of medical and other supplies from lodges across the United States. It also enlisted group of Theosophical women already involved in social reform, the Sisters of Compassion. Coryn trained them in basic nursing skills for use among wounded soldiers."[25] Coryn continued a leadership role in the organization, relocating in 1900 to Point Loma, California, when the American T.S. relocated its headquarters. He lived in Point Loma until his death in 1927. He never married.[26]

Herbert Coryn contributed numerous essays to various Theosophical journals, but never published a monograph. Many of his essays were published in pamphlet format. These include: