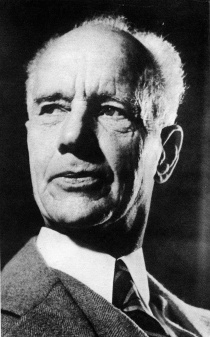 Gottfried de Purucker (1874-1942) was a longtime resident of theTheosophical Society based in Point Loma and was Leader of that organization from 1929 to 1942. He is greatly admired in the broader Theosophical Movement for his erudition, his superior skills as writer and editor, and as a proponent of fraternization among all the various Theosophical societies.

Hobart Lorenz Gottfried de Purucker, was born in Suffern, New York on January 15, 1874.[1] His father, Gustav Edmund von Purucker, was a naturalized citizen of the United States born in Bavaria, and his mother, Juliana P. Smyth, was born in Pennsylvania.[2][3] The family moved to Grayson, Texas in the late 1870s. In 1880 there were four children: Dollie, 9 years, Hobart, 6 years, Lois, 4 years, and a 2-month-old baby Gustav, and the family was later described as being seven in number. "In 1881-2, while the family was living in Texarkana, Texas, he [GdeP] came down with a severe case of typhoid fever, and his doctor actually declared him dead at one point. In 1888 the family settled in Switzerland, where he continued studying under his father and various tutors, as well as at such schools as the College de Geneve."[4]

Note on his name: Although many American sources refer to the name "Purucker," the article "de" is generally accepted in Theosophical circles. GdeP and G de Purucker are commonly used.

I was destined for the church by my father, who was a clergyman of the Anglican communion, and pastor of the American church in Geneva. My father taught me Greek; he taught me Hebrew; he had teachers for me in other languages. Living in a French-speaking country, of course I spoke French; my mother being an American, of course I spoke English; my father being a German, of course I spoke German. I was also taught Italian and Spanish. I was likewise taught Anglo-Saxon. . . . When I was about fourteen years old, I remember translating, as a Christmas gift for my father, the entire Greek New Testament, and he said it was very well done. . . . When I was seventeen I translated from the Hebrew the book of Genesis, as a birthday gift to my father.[5]

"After coming across a translation of the Upanishads, he began to study Sanskrit. By 18 he knew he did not want to enter the church, and decided instead to leave school to travel in the United States."[6]

Taking over as Leader

On July 11, 1929, Mrs. Tingley passed away in Visingsö, Sweden, following an automobile accident in Germany.

Boris de Zirkoff gave an account in an autobiographical manuscript of the moment Dr. de Purucker took over as leader:

The chair was occupied by the visible presence of Master K.H. He was seen by several, including myself [Boris de Zirkoff]. After about ten minutes, G. de P. got up and went back to the chair he came from. In that interval of time (as G. de P. later replied to our questions) some of the aspects of his inner principles were withdrawn by the Teacher and G. de P. became a direct messenger of the Lodge.[7]

"After Tingley's death, de Purucker reasserted those activities that Judge had emphasized. He reopened local lodges across the United States and around the world and funneled increasingly scarce resources at Point Loma into the publication of a vast literature of books and periodicals, thus shifting, in Theosophical parlance, the emphasis of theosophical work away from the female or emotional, and back to the male or intellectual"."[8]

Dr. de Purucker sought to improve relations among the various branches of the Theosophical Movement.

In 1930, as part of his Fraternization program, G. de Purucker invited officials and prominent members from various theosophical organizations to meet informally together to commemorate the hundredth anniversary of H. P. Blavatsky's birth. After finding it impractical to hold this Centennial Conference at Point Loma, Purucker accepted the suggestion of A. Trevor Barker, compiler of the Mahatma and Blavatsky letters to A. P. Sinnett and head of the English Section TS (Point Loma), to hold it in London on June 24, 1931, in conjunction with Purucker's first European tour.[9] 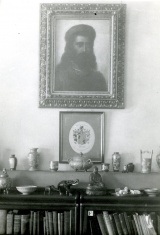 During World War II, the United States military insisted on purchasing the Point Loma property to supplement its other important San Diego bases. In 1942, Dr. de Purucker and his associates made a difficult decision to move headquarters to Covina, California. The university and publishing house remained in operation, but the Lomaland School ceased to exist.

On September 27, 1942, shortly after supervising the relocation to Covina, GdeP died of a heart attack at the age of 68. Private memorial services took place on Wednesday, September 30 in the Theosophical Temple near Covina.[10][11]


de Purucker and the Mahatmas

The Point Loma community accepted the account from Boris de Zirkoff about how Dr. Purucker was in communication with Master Koot Hoomi.

"Point Loma Theosophists connected his intellectual depth with his supernatural identity. They believed that a Master joined his personality with de Purucker's, just as a Master evidently guided Judge's mind and body. De Purucker claimed that this relationship began during a near-death experience when he was seven or eight years old. He believed that his own psychic powers were extraordinary, and that he communicated with the Master on important matters related to the Point Loma community."[12]

I heard him lecture on many occasions. As a student of comparative religions myself, I was always impressed by his erudition and the simplicity of his presentation. In the Question and Answer periods which followed many of his lectures, he was always patient and understanding and never patronizing. He was a wise and gentle teacher. I have often thought that the Tibetan doctrine of tulku might well apply to him. He was a man of great conviction, courage and hope. [13]

He also produced, "first as transcribed lectures and then as published books, a number of texts in what would eventually be called "technical theosophy.," because of his complex, multilayered interpretations of theosophical doctrines. ."[14]

The Theosophical Society Point Loma-Blavatskyhouse has created a digital library of his works.