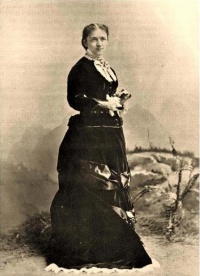 In April, 1890, Mrs. Holloway married Colonel Edward L. Langford, secretary and treasurer of the Brooklyn and Brighton Beach Railway, and president of the Fulton Street elevated road. He had served with distinction in the Civil War.[2] She continued using "Laura C. Holloway" as her nom-de-plume after this marriage. Mrs. Langford died on July 10, 1930 at her home in Canaan, New York.[3]

In December, 1884, Mrs. Holloway was asked to sit for an interview by the Society for Psychical Research, in the investigation conducted by Richard Hodgson. She asked for anonymity, and was designed as "Mrs. X" in the subsequent "Hodgson Report". She was regarded as a first degree witness to Master K.H. in his astral form:

This lady is well-known to one member of the Committee, and appears to him to be an exceptionally conscientious, accurate, and trustworthy informant. The reasons which she has given for withholding her name, and the bulk of her evidence, from even the limited public to which this paper is addressed, are fully intelligible to us. But we may say, in brief, that she reports herself to have distinctly and repeatedly seen Koot Hoomi in “astral body,” in a country distant from India, before she had even seen his picture (which she subsequently recognised), and without discovering who he was; that she acted on communications made to her in these interviews; and that these communications were afterwards confirmed by letters in the Koot Hoomi handwriting, addressed not only to Madame Blavatsky and others, but to Mrs. X. herself, under such conditions that no other person, as she maintains, could possibly have had a hand in them.[14]

When she returned to Brooklyn, she remained a Theosophist, writing articles for The Word, but never became active in the Theosophical Society. Concurrently with her interest in Theosophy, Mrs. Holloway had been attracted to the lifestyle and beliefs of the Shaker community. She moved to a farm in Canaan, New York, and lived there for several decades until her death in 1930. Her body was cremated.[15]