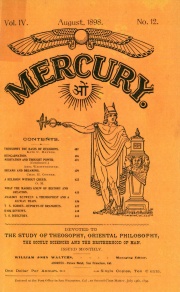 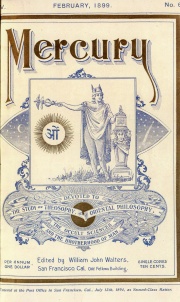 Mercury was published in San Francisco from 1894 to 1899, with William John Walters as the editor. It was initially written for children, since Walters was Conductor of the Lotus Circles children's group in San Francisco. However, following the split in the American Theosophical movement, the August 1895 issue announced that Mercury was "'A Theosophical Magazine'. Now the monthly magazine of the newly established American Section." In 1897, the Mercury Publishing Company produced a cookbook that included an advertisement for Mercury, calling the periodical "A Theosophical monthly, dedicated to the study of Oriental philosophy, the Occult Sciences and the Brotherhood of Man."

Contains 32 pages; has a special Forum department to which readers are invited to send questions; Theosophical news; Book Reviews and a "children's corner." It is the official organ of the American Section of the Theosophical Society. [1]

As the Section magazine, "it was a small journal... published privately by a faithful member with a modest subsidy from the Section." It was replaced by The Theosophic Messenger in 1900.[2]