The Theosophical Society in America was led by William Quan Judge until his death on March 21, 1896. Mrs. Katherine Tingley took over as leader, and renamed the organization to Universal Brotherhood and Theosophical Society. At the 1897 convention, the membership of the UBTS decided establish the Lotus Circles as a separate organization under the International Brotherhood League or IBL, changing the name to Lotus Groups. "By 1899, according to [Elizabeth] Spalding, between thirty-two hundred and forty-six hundred children participated in Lotus Groups Nationwide.[1] 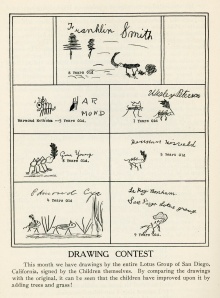 The re-formed American Section of the Theosophical Society based in Adyar, Madras, India also continued to schedule children's activities in the local groups, and printed support materials in its periodicals. Mercury, edited by William John Walters, was initially written for children, since Walters was Conductor of the Lotus Circles children's group in San Francisco. The periodicals reported on activities of the children's groups, and printed stories and drawings for children to enjoy. Fairies pixies, myths, and animals were favorite subjects. Support was centralized in the Lotus Bureau, headed by Marjorie Tuttle. She would suggest monthly topics for teaching Theosophy to the young. The suggestions she proposed to begin in September 1919[2] were: