Preamble and By-laws of the Theosophical Society 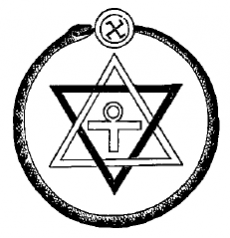 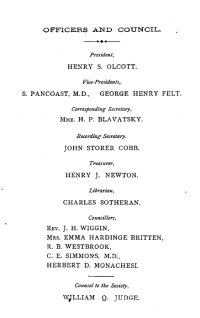 Officers of TS, from Preamble

The rooms of the society are at Mott Memorial Hall, No, 64 Madison Avenue, New-York, to which address all books or other articles for the society may be sent.

Letters of inquiry, relating to the society, should be addressed to the Corresponding Secretary, and business communications to the Recording Secretary, P. O Box 4335, New-York.

The title of the Theosophical Society explains the objects and desires of its founders: they seek “to obtain knowledge of the nature and attributes of the Supreme Power and of the higher spirits by the aid of physical processes.” In other words, they hope, that by going deeper than modern science has hitherto done, into the esoteric philosophies of ancient times, they may be enabled to obtain, for themselves and other investigators, proof of the existence of an "Unseen Universe,” the nature of its inhabitants, if such there be, and the laws which govern them and their relations with mankind.

Whatever may be the private opinions of its members, the society has no dogmas to enforce, no creed to disseminate. It is formed neither as a Spiritualistic schism, nor to serve as the foe or friend of any sectarian or philosophic body. Its only axiom is the omnipotence of truth, its only creed a profession of unqualified devotion to its discovery and propagation. In considering the qualifications of applicants for membership, it knows neither race, sex, color, country, nor creed.

That all the members of a society should acquire an equal degree of knowledge within the same period of time is not to be expected. Knowledge is always progressive, and proportional to natural capability and susceptibility to intellectual impression. Even the most intelligent and the most perseveringly studious must labor in order to obtain or attain. To all, however, are alike indispensable, rectitude of principle and conduct, and love of truth and wisdom. No student can win his diploma without undertaking a long course of study and proving a good character; and every handicraftsman has to serve his apprenticeship before he can be journeyman or master. So theosophy, which claims to teach the vital points of science and art, exacts from its adepts an assiduity of purpose, a catholicity of mind, an unselfish devotion, an unflinching courage and perseverance, and a purity of life and thought commensurate with the nature of their self-imposed task, before admitting them into the arcana of nature, and intrusting them with powers not shared by meaner souls.

The founders of the Theosophical Society begin their work with a solemn conviction of its importance. They do not undervalue the difficulties, intrinsic and extrinsic, of the task. Their work is that which the Spiritualists have neglected, the Materialists have not attempted, and the Theologians have misunderstood and undervalued. Starting with a hope, rather than a conviction, of the attainment of their desires, they are animated solely by an earnest purpose to learn the truth, wheresoever it may be found; and esteem no obstacles so serious, no pains so great, as to excuse them for relinquishing it.

They look in vain to the Church for such evidence of immortality as will satisfy the exactions of a fearless reason; in vain to her opponents for an explanation of the preterhuman experiences of mankind, from the earliest periods. The Spiritualists, who profess to be in constant relations with the departed, are unable to agree upon a system of philosophy. Thus the longing of the race for a practical demonstration of its future existence goes unsatisfied; the laws of intercommunication between the visible and the invisible worlds are not accurately defined; and the problem of the two eternities which bound this life remains unsolved, despite a multitude of churches and academies.

Everywhere the greatest activity in metaphysical speculation is manifested. In the East, the corrupted ancient faiths are confronted with European propagandists, who struggle to keep the foothold which was won for them by the sword and diplomacy. Japan is becoming educated in the modern arts and sciences, and her intelligent minds, in acquiring our languages, gain access to the most profound and persuasive teachers in all departments of advanced thought. In China, the missionary is pushing his way more and more deeply into the heart of the country, and coming into closer relations with its inhabitants. In India, the Brahmo-Somaj, or “Society of God,” has begun in earnest the colossal work of purifying the Hindoo religions from the dross which centuries of priest-craft have infused into them.

In Europe, we see Materialism gradually encroaching upon the domain of the Church, and even gaining ground among her clergy; the congregations are composed almost exclusively of women; adult males, as a rule, are free-thinkers; the Roman Catholics are losing their political influence; and the whole Christian hierarchy is arraigned at the bar of public opinion by the philosophical scientists, who, in searching after the secrets of mere material nature, have had their own views of a God almost, if not wholly, obscured. Russia, in civilization the youngest of European nations, has just begun, through its Imperial University, a scientific investigation of the spiritualistic phenomena. In Great Britain, the safety of the Established Church is threatened by the non-conforming sects, and all by the principles promulgated by many members of the British Association, who, in indirectly teaching the doctrine of rationalism, strike a fatal blow at an establishment which is based upon simple reactionary faith, and is incapable of appeasing the newly awakened spirit of reasonable inquiry.

In the United States, the rebellion of the public mind against ecclesiastical authority has been comparatively more general than in the parent country, and at the present time, so inconsiderable has the influence of the Protestant Church become, that it may almost be said that the conflict is between the Romanists and the Spiritualists — the former representing the idea of ultra-montanism and intolerance; the latter, that of the absolute sovereignty of the individual in the matter of belief as regards their assumed intercourse with a spirit-world, and, with many, that of unbridled license in the relations of the sexes.

It is probable that, but for the extraordinary multiplicity of the alleged spiritual phenomena, and the consequent revival of faith in the immortality of the spirit, Materialism and various forms of atheism would have acquired a far more general hold upon the American people. As it is, however, the defection from the sectarian bodies has been to the advantage of Spiritualism, rather than to that of its adversaries, notwithstanding the numerous exposures of deception on the part of mediums.

In view of the existing state of things, it will be seen that the Theosophical Society has been organized in the interest of religion, 1science, and good morals; to aid each according to its needs.

The founders being baffled in every attempt to get the desired knowledge in other quarters, turn their faces toward the Orient, whence are derived all systems of religion and philosophy. They find our ancestors practicing important arts now lost to us. They discover them dealing with forces whose very names are now unknown, and the simplest demonstration of whose existence is impossible to our scientists. In the Bible occurs a multitude of passages which corroborate the inferences deducible from the picture-writings on the architectural remains of the ancient nations; while every important museum of antiquities augments the proof of their wisdom and enlightenment.

The Theosophical Society, disclaiming all pretension to the possession of unusual advantages, all selfish motives, all disposition to foster deception of any sort, all intent to wilfully and causelessly injure any established organization, invites the fraternal cooperation of such as can realize the importance of its field of labor, and are in sympathy with the objects for which it has been organized.

The title of the society is “ THE THEOSOPHICAL SOCIETY.”

The objects of the society are, to collect and diffuse a knowledge of the laws which govern the universe.

The society shall consist of active, honorary, and corresponding fellows.

1. At all stated meetings of the society, for the transaction of ordinary business, the order of business shall be as follows:

2. Any proposition presented for the action of the society, at any of its meetings, shall be in writing, and signed by the member presenting it. A proposition, thus presented,


when seconded, and the question thereon stated from the chair, shall be deemed in the possession of the society, and open for discussion.

3. No fellow shall speak more than once upon the same question, until all the other fellows present desiring to speak shall have spoken;


nor more than twice on any question without leave of the society.

4. The proceedings of the society in all its meetings shall be governed by Cushing’s Manual, except as otherwise provided by these by-laws.

At all the meetings of the society, eleven fellows shall constitute a quorum for the transaction of business.

At all the meetings of the society, on the arrival of the appointed hour, and the presence of a quorum, the president, or, in his absence, one of the vice-presidents, or, in their absence, a chairman pro tem., shall be elected, and preside.

The presiding officer shall have only a casting vote.

He shall preserve order and decide all questions of order, subject to an appeal to the society. He shall also, unless otherwise specially ordered, appoint all committees authorized by the society; and, at every annual election, before the opening of the polls, he shall appoint two tellers of election.

4. All documents relating to the society, and under the charge of the secretaries, respectively, shall be placed in such depositories in the rooms of the society as the council may provide and designate for that purpose.

The librarian, together with the council, shall have the charge and arrangement of the books, maps, and collections belonging to the society. He shall cause to be kept in the rooms of the society, a registry of all donations to the library or collections of the society, acknowledge their receipt by letter to the donors, and report the same, in writing, to the society, at its next stated meeting. Under the direction of the council, he shall superintend the publication and the purchase of such books, pamphlets, and other matter, relating to the library, as maybe ordered by the society or council.

CHAPTER XVII. ALTERATION OF THE BY-LAWS.

No alteration in the by-laws of the society, and no substitution of others in their place, shall be made unless offered in writing at a stated meeting of the society, at least one month prior to final action and adoption, by a vote of two thirds of the fellows present.

Availability of the publication

Copies of the original 20-page booklet are available in the Wisconsin Historical Society Library and presumably in the Theosophical Society library in Pasadena, California. The Preamble was printed in the September, 1947 issue of The Theosophical Forum.[1]