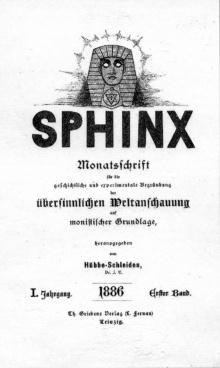 The Sphinx (Die Sphinx) was a German-language Theosophical periodical published by Dr. Wilhelm Hübbe-Schleiden. The monthly magazine first appeared in January, 1886 and continued until June, 1896. Initially, it was conceived to be a publication of the Germania Theosophical Society, but after the Hodgson Report came out and the lodge disintegrated, The Sphinx continued first as a magazine of the Munich Psychological Association, then in 1892-1893 as official organ of the Theosophical Association, and from 1894-1896 of the German Theosophical Society.

Subject matter centered around Theosophical views of metaphysics, mysticism , philosophy, and Eastern religions. Staff members and contributors included Max Dessoir, Dr. Franz Hartmann , Carl Kiesewetter, and Carl du Prel. Many illustrations were created by the painter Fidus from 1891 to 1894. In 1889, Max Dessoir introduced a new term that he had coined - "parapsychology".

The Sphinx is available digitally at the Unviersity of Freiburg website. The Union Index of Theosophical Periodicals offers an index.