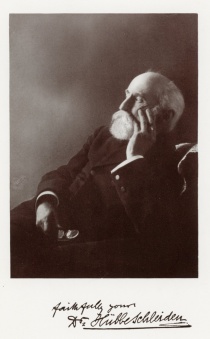 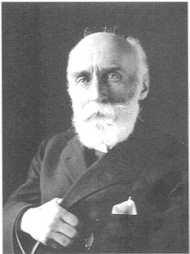 Dr. Wilhelm Hübbe-Schleiden (October 20, 1846 - Göttingen, May 17, 1916) was a German scholar greatly interested in geographical exploration and in German colonial politics. In 1884 he became the president of the Germania Theosophical Society and was the founder and editor of the Theosophical periodical The Sphinx. He was also a member of the Society for Psychical Research.

Wilhelm Hübbe was born in Hamburg on October 20, 1846. He later appended the name "Schleiden" in honor of his maternal uncle Matthew Schleiden, a botanist from Münich. Wilhelm was the youngest of five sons of Dr. Hübbe, who was prominent in the legal world. His grandfather was an eloquent and broad-minded preacher. "Willi" thrived in his family life and at the local Gymnasium, then spent time at universities of Göttingen, Heidelberg, Münich, and Leipzig studying jurisprudence and political economy to take a Doctor of Laws degree.[1]

After a brief term of practice as an Attorney in his native town he, however, accepted the offer of a post in connexion with the German Consulate General in London [as attaché during 1870-71], subsequently entering one of the great London Banking Houses, in order to acquire a thorough knowledge of business routine...

After a short period spent in Spain, he returned to England, embarking thence with a British friend on an expedition to the West Coast of Africa, where by their mutual efforts a business undertaking was founded at Gaboon.[2]

Business activities did not interest the young man as much as the theory of colonial administration, so he returned to Hamburg to write in support of German colonization. "So far-seeing was this pioneer of a new movement that his books Ethiopia (written in 1878), and Oversea Politics (1880), still [in 1911] command respectful attention, and are indeed deemed classics in this particular branch of German literature."[3]

Dr. Hübbe-Schleiden was greatly interested in Occultism. In the summer of 1884 he received from his friend Herr von Hoffmann the newly translated German edition of Esoteric Buddhism. Hübbe-Schleiden read the volume all night and soon afterward contacted Colonel Olcott.

Ascertaining from that gentleman that Madame Blavatsky was then in Germany at Elberfeld with Frau Gebhard, one of her earliest German adherents, he, with characteristic promptitude, set out for that town in search of the Founder of the Movement.

It was here, then, that on the 27th of July, 1884, the first German Branch of the Theosophical Society, styled "Theosophische Societät Germania" was founded in the presence of H. P. Blavatsky, Mr. A. P. Sinnett, and other members then in Germany, having for its President Dr. Hübbe-Schleiden, and for its Acting Secretary Herr Franz Gebhard... Among the names of those who then joined the Society may be mentioned such well-known men as Dr. Carl du Prel, the artist, Gabriel Max, Herr von Hoffman (before mentioned), Herr Direktor Sellin, as well as that gentleman's brother, and Herr Bernhard Hubo.[4]

His Theosophical activities took primarily a literary form, establishing a theosophical magazine called The Sphinx in the year 1886 in Münich.[5] It was published regularly for about ten years.

Dr. Hübbe-Schleiden, like William Quan Judge, received two unusual letters from the Mahatmas Koot Hoomi and Morya, which were called "certificates." This occurred in a railway carriage during a "propaganda" tour with Col. Olcott.[6] Each document stated clearly that The Secret Doctrine was a joint production of the Mahatmas with Helena Petrovna Blavatsky. He found them, evidently precipitated, in his copy of Richard Hodgson's S. P. R. Report. Geoffrey A. Barborka in his extensive analysis of the unusual style of handwriting of the letters, stated: "The point is here made that a precipitated message may be produced by one who knows how to do so in any desired style of writing![7]

Hübbe-Schleiden was instructed not to publish the letters, but he showed them to Judge on July 21, 1892. Mr. Judge received permission to print his copies two years after Blavatsky's death, and he did so in The Path, in 1893.[8]

Letter 69 – K. H. gave instructions not to publish the letters.

Letter 70 – M. provided certification of the authorship of The Secret Doctrine.

Letter 71 – M. advised him about where to stay.

After a trip to India around 1896-1898, he returned to Europe and, as reported in The Theosophist,

[He] may be said to have devoted himself even more exclusively than before to the study of Esoteric Philosophy, making, indeed, his life-work an elaborate treatise on Reincarnation, bringing, moreover, this much argued and, in some quarters, fiercely combated question into line with the theories held by present-day European Science, in so impartial, and yet so convincing a manner that his labors may be regarded as constituting as great a gain to orthodox scientific literature, as they most assuredly are for his fellow Theosophists.[9]

Dr. Hübbe-Schleiden's papers and books were deposited at the Library of Göttingen University.