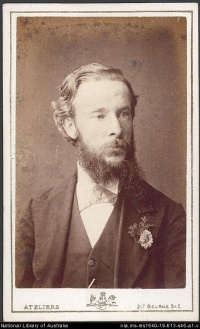 William Henry Terry (1836–1913) was an Australian shopkeeper and Spiritualist. He was the founder and editor of the Spiritualist magazine The Harbinger of Light, published in Melbourne. He was a member and Councillor of the Theosophical Society in Australia, and received a note from Master Morya.

William H. Terry was born at Islington, London in 1836. He went to Melbourne in 1853 with his father, a brother and a sister. 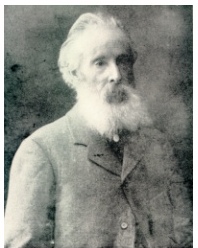 In March 1880, Mr. Terry became an inaugural member and Councillor of the Theosophical Society in Australia and showed great interest in The Theosophist. He sent three letters to the Editor of the latter with inquiries concerning theosophical ideas. These were considered important and A. O. Hume was persuaded to answer them at length in the series of articles entitled "Fragments of Occult Truth".[1][2]

Mary K. Neff wrote of how Terry corresponded with Madame Blavatsky, and how "he made his magazine the mouthpiece of Theosophy in Australia, by publishing the 1880 Rules of the Society, advertising The Theosophist in his Harbinger, quoting articles from it, encouraging discussions in his columns on the relative merits of Spiritualism and the new movement, Theosophy, on Reincarnation, etc.[3]

On December 12, 1881, he received a note from Mahatma Morya precipitated on a letter that Mme. Blavatsky had sent him, asking for his address.[4] It was published as Letter 80 in Letters from the Masters of the Wisdom Second Series.

It is Tendered Dr. William H. Terry, a Prominent Spiritualist of Australia, by His Cleveland Friends -- A Very Pleasant Affair.

A pleasant informal farewell reception to Dr. William H Terry, of Australia, took place, Monday evening, at the home of Mr. Thomas Lees, No. 105 Cross street. The doctor, who came on a visit to the World's Fair, is making a tour of the principal cities of the country and is now en route to the Eastern ones. He will remain in Boston at least two weeks. From there he will go to the Southern cities. He expects to reach home in midsummer, the latter part of January. Dr. Terry is the head and front of the Spiritualistic movement in Australia, and publisher of a very successful magazine, the Harbinger of Light. He gave the company a very interesting account of his conversion to Spiritualism thirty years ago, and the circumstances which led to the publication of his magazine. Speeches followed by Mrs. Lake and others, interspersed with vocal and instrumental music. Dr. Terry left Tuesday morning for Buffalo, intending to view the wonders of Niagara Falls.[5]