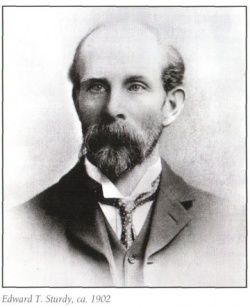 Edward Toronto Sturdy (1860 – March 15, 1957) was a Sanskrit scholar, student of Hinduism and Buddhism, and a member of the Theosophical Society. He was part of the Inner Group formed by H. P. Blavatsky and the one who recorded what is today known as HPB's Diagram of Meditation.

E. T. Sturdy was born around 1860 in Canada. He went to New Zealand at the age of 19. After some travels he left Wellington in 1888 to take up residence in London, so he could study with Madame Blavatsky. He was married in 1894. His son Ambrose was born in Edinburgh the following year, and daughter Dorothy two years later. By 1901 Sturdy had been widowed, and was living in London with two small children.[1] A wealthy property developer, he commissioned extensive remodeling of a house in the Dorset village of Burton Bradstock: 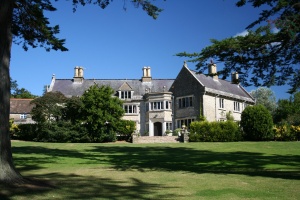 The name, Norburton House was adopted in 1902 when the owner, Edward T Sturdy (1860–1957) commissioned his uncle, who was an architect, to undertake major refurbishment and building works. A wing was added incorporating the main hall with its elaborately carved staircase and the leaded window together with the 3 guest bedrooms all of which reflect the Arts and Crafts movement.

Edward Sturdy had been a property developer based in London and his move to the countryside coincided with a revival in the use of traditional crafts as an antidote to mass production. The carved staircase and detailed stonemasonry in the main hall are wonderful examples of the Arts and Crafts movement. Edward Sturdy also studied philosophy and gained a reputation as a Sanskrit scholar and translator. His interest in Eastern cultures led him to travel quite extensively and it appears that it brought him into contact with Walter Crane, one of the founders of the Arts and Crafts movement. Walter Crane designed an elegant fireplace with peacocks in the East wing of the house. Evidence of Sturdy’s interests and travels is prevalent in the house and the grounds... 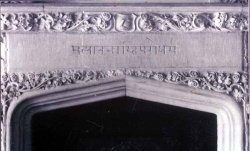 The Sanskrit inscription (prayer) over the fire place in the main hall “SATYAT NASTI PARA DORMA” has been translated by the British Museum to read ‘There is no higher law than truth’.[2]

In 1884, he heard about the Theosophical Society through a friend and sent a letter to Adyar. He joined the Society on October 10, 1885, as one of the first ten New Zealanders to become members.[3][4][5] Interested in Indian philosophy, the next year he went to Adyar hoping to get in touch with "learned Hindus". For a short time around March, 1887 he joined H. S. Olcott who was on a tour in Northwest India. He, then, left for Ceylon to attend to some business for the TS.[6] Later, he went to London and met H. P. Blavatsky, who had just moved there in May. It may be at this time that she dictated to him her Diagram of Meditation.

After a few months in London, Mr. Sturdy returned to New Zealand by way of New York. It is here that he met W. Q. Judge. Once back in his country he settled in Wellington and gathered some students around, which eventually lead to the formation of the first lodge in New Zealand, the Wellington Lodge, chartered in November 1888:

Among its members were Sir Harry Albert ATKINSON, Prime Minister of New Zealand; his wife Anne E. Atkinson; their son, E. Tudor Atkinson; M. van Staveren, a Jewish rabbi; H. M. Stowell (Hare Hongi), a Maori tohunga (priest); and Edward Tregear, a poet and Maori scholar, who wrote a book about the similarities of the Hindu and Maori languages.[7]

However, Mr. Sturdy left for England in December 1888 to become a student of Mme. Blavatsky, and after his departure the Wellington Lodge ceased to exist (it was rechartered in 1894).

He became a member of the Esoteric Section of Theosophy and one of the members of the "E.S.T. Council" appointed by HPB. He was also part of the European Advisory Council formed in July, 1890, which would assist her in her new function as the Presidential authority of the Theosophical Society in Europe. The other members of the Council were Annie Besant, W. Kingsland, Herbert Burrows, A. P. Sinnett, H. A. W. Coryn, and G. R. S. Mead.[8]

Mr. Sturdy was also a member of the Inner Group formed by HPB in August 1890. Many years later, in 1947, he wrote: "I think I must have been the most skeptical of all the members of HPB's Inner Group". He then proceeds to say that in time he had come to believe in Mme. Blavatsky and also in the Masters of Wisdom as "concrete individuals" and not only as ideals.[9]

On April, 1891, ill and few weeks before dying, HPB was concerned that Mr. Sturdy had also been taken ill with influenza. When it was suggested that Mr. Mead should bring him to be nursed at Headquarters, she was much pleased and insisted on his being sent for at once.[10]

Mr. Sturdy was present at the meeting at 19 Avenue Road on May 27, 1891, when the E.S. was reorganized immediately after the death of HPB.

In August 1893 he published an article on Gurus and Chelas in Lucifer. This induced Annie Besant to issue a critique in October of that year, taking a stand against the spirit behind Mr. Sturdy's article.

He was actively involved in the controversy that ended up with the secession of the American Section of the Theosophical Society led by Mr. Judge. He stayed with the TS Adyar. However, in 1894 he resigned from the Society to work independently.[11]

Theosophy was not his only inspiration. In 1940 he wrote: "What I have, I owe largely to H. P. Blavatsky, to some extent to Anna Kingsford and Edward Maitland, and perhaps, most of all, to the Vedanta and Buddhist teachings".[12] In 1947 he wrote to Boris de Zirkoff:

Although I often refer to The Secret Doctrine, I am not so much of an Occultist, which HPB undoubtedly was, as a Mystic and follow in thought and effort the teachings of the Advaita Vedānta and Mahāyāna Buddhism.[13]

During the latter part of 1893, Mr. Sturdy met Swami Shivananda. In 1895 Swami Vivekananda had been planning a visit to London; Miss Henrietta Müller, who had already met him in America, extended this invitation, and Mr. E. T. Sturdy had requested him to stay at his home there.[14] Vivekananda gave a lecture October 22, 1895, at Prince’s Hall, of which Mr. Sturdy was the Chairman.[15] Eventually, Swami Vivekananda and Mr. Sturdy began to work together on an English translation of the Bhakti aphorisms of Narada. After a two months' stay in England, before leaving, he arranged that Mr. Sturdy should conduct classes in London till the arrival of a new Swami from India.

Another testimony of his pursuit of Eastern philosophy comes from the writer Lafcadio Hearn (a.k.a. Koizumi Yakumo) who wrote to a friend in April, 1898:

I have met a most extraordinary man. . . . His name is E. T. Sturdy. He has lived in India --up in the Himalayas for years-- studying Eastern philosophy; and the hotel delicacies will do him no good, because he is a vegetarian. He is a friend of Professor Rhys-Davids, who gave him a letter of introduction to me; and has paid for the publication of several Eastern texts--Pali, etc. Beyond any question, he is the most remarkable person I have met in Japan. Fancy a man independent, strong, cultivated, with property in New Zealand and elsewhere, voluntarily haunting the Himalayas in the company of Hindoo pilgrims and ascetics,--in search of the Nameless and the Eternal. Yet he is not a Theosophist exactly, nor a Spiritualist. I did not get very near him--he has that extreme English reserve which deludes under the appearance of almost boyish frankness; but I think we might become fast friends did we live in the same city. He told me some things that I shall never forget,--very strange things.[16] 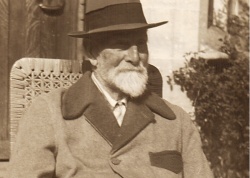 In a letter to Boris de Zirkoff dated 18 April, 1947, he wrote: "I am the last of all her Inner Group. I live almost the life of a hermit, for my contact with the outer world is almost entirely by letters".[17]

In March 13, 1957, Mr. Sturdy had a slight stroke from which he recovered. However two days later, on March 15, he passed on suddenly after lunch "without even a sigh", aged 97. It is reported he was reading an article on life after death in Buddhist thought written by his friend Christmas Humphreys.

The Union Index of Theosophical Periodicals lists 23 articles by or about Mr. Sturdy.