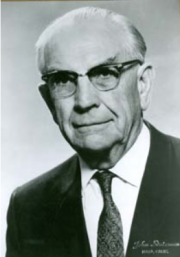 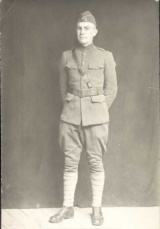 Victor A. Endersby (1891-1987) was an American Theosophist. He served as editor of Theosophical Notes and contributed many articles to Theosophy. With Henry Geiger, he founded the magazine Manas in 1948 in a weekly format. He and his wife Frances were members of the U. L. T.'s Dzyan Esoteric School, and he was also involved with the Theosophy School.[1]

Victor Arthur Endersby was born on December 19, 1891 in a ranch house in Augusta, Montana. Alvadus Oden Endersby, his father, was a cattle rancher married to Mary Elizabeth Cook, a school teacher. In addition to Victor, they had two younger sons. His family moved north in 1895, and settled in an area of southern Alberta, Canada that was then part of the North West Territories.[2] The entire family worked hard at their cattle ranch and in other efforts to earn a living, and schooling for the boys was sporadic. Victor was largely self-taught until the family sold their cattle and moved to Northern California, where he was able to attend school. He was able to enter college at Stanford University, where he completed an engineering degree in 1916.[3]

His career began in working on roads in the California redwood country, and then at the Coast and Geodetic Survey in Alaska. the First World War intervened, and he was in the U. S. Army from 1917-1918.

He served in France where he carried with him a translation of the Bhagavad Gita and The Ocean of Theosophy, and returned with the rank of "Captain of Engineers."[4]

On June 3, 1925, Victor married Frances Holman. They moved to California and settled in Contra Costa. They had four children: Florence, Elena, Keith, and Sandra.[5]

Mr. Endersby was a civil engineer, whose special expertise was in road and bridge construction. "His crowning achievement was as Chief Engineer for the eastern half of the San Francisco Bay Bridge."[6] He later engaged in engineering research for Shell Oil Company. He was published in the Encyclopedia of Chemical Technology and in the 1964 edition of Encyclopedia Britannica. After retirement in 1953, "he continued to work as a consultant and investigator into the 1970s."[7]

Mr. Endersby died on November 8, 1988 in Napa, California at the age of 96. His ashes were scattered in the Pacific Ocean.[8]

Involvement with Theosophy and Theosophists

Victor was acquainted with Theosophists from a young age:

A major influence in the life of the young Victor was a colourful individual who lived just a few miles from the Endersbys. This was John "Kootenai" Brown, an early Canadian Theosophist who was to become the first Superintendent of the nearby Waterton Lakes National Park. He allowed the boy to borrow books from what eighty years later the man remembered was a "remarkable library". Victor's uncle, Ted Endersby, was also a member of the Theosophical Society at that time.[9]

Brown loaned books to young on science, literature, and religion, but held back the Theosophical texts until the boy was older, saying "They were for grownups."[10] As a college sophomore in 1912, Victor encountered The Ocean of Theosophy and The Secret Doctrine.

Encouraged by findings in these books, he became acquainted with the nearby Halcyon Theosophical group, The Temple of the People, and other Theosophical organizations where he began attending meetings while going to school."[11]

After returning from wartime service, he visited various Theosophical organizations. In 1920 he joined a lodge of the Theosophical Society based in Adyar, Chennai, India, but was dissatisfied that the group was not pursuing the original teachings of Theosophy. "In 1921 he encountered and joined in with the United Lodge of Theosophists (U.L.T.) where he met John Garrigues (d. 1944), whose mental agility and wit caught Victor's admiration." Victor "returned to The Secret Doctrine and made an abstract of all of the scientific references in it."[12]

Victor remained loyal to the United Lodge's mission of disseminating the fundamental principles of Theosophy and their practice of the remainder of his life, and was one of the U.L.T.'s most valued contributors of articles to the U.L.T.'s magazine, Theosophy. Victor reported that at times he "had written as much as 405 of the magazine's content." He was also a member of the Theosophy Company|Theosophy Company's]] Board of Directors in the 1930s, during the period that the Point Loma society's leader, Godfried de Purucker, was campaigning for the reunification of the fragmented Theosophical organizations into a harmonious body. In 1924 Victor and his wife Frances, joined U.L.T.'s Dzyan Esoteric School (D.E.S.), an inner group of pledged students dedicated to the study of Blavatsky's esoteric writings. In 1932 or 1933, they founded the Berkeley U.L.T. Lodge, with forty-two attending the first tmeeting. While in Northern California, they remained active with this lodge through the 1970s, when it fanially merged with another lodge.[13]

Henry Geiger, another U.L.T. member, worked with Victor to start a periodical called Manas, which was published from 1948-1987. There was some turmoil in the local U.L.T., and the Endersbys were suspended from the D.E.S. in 1948. Victor left the Manas venture to launch his own journal, Theosophical Notes, which was published privately until 1978. He wrote virtually all the articles, and Frances handled other aspects of publication. The subscriber base was never large, but the periodical and Endersby were well respected by Theosophists of all stripes.

Fraternization or reunification of groups within the broad Theosophical Movement was a great interest of Endersby. Following turbulence in the late 1940s and early 1950s, many Theosophists felt disenfranchised or disaffected. Endersby and other independent Theosophists formed the International Fraternity of Theosophists. The organization was announced in The Canadian Theosophist in 1956, and quickly grew to almost 100 members from various backgrounds.

After John Symonds' 1959 sensational biography, Madame Blavatsky, Medium and Magician was published, Endersby saw a need for an accurate biography of H. P. Blavatsky. He bought an offset printing press and began to issue his own book on the subject serially. It was published in book form as The Hall of Magic Mirrors in 1969.[14] Always a love of books, he initiated another labor in support of Theosophical literature: a proposal for a library and research center, which culminated in establishment of Alexandria West Library.[15]

The Union Index of Theosophical Periodicals lists over 900 articles by Victor Endersby. Most are in his journal Theosophical Notes.