For the Theosophical journal see The World-Mother (periodical)

World-Mother is a term found in at least two major branches of the Theosophical movement. In the Adyar tradition, the World-Mother is member of The Inner Government of the World. She is not one of the Masters of Wisdom but a "mighty Angel" connected with the feminine aspect of the Logos and the comfort of those who suffer. Early in her life Rukmini Devi Arundale was expected by some to become a vehicle of the World-Mother, but apparently this never came to fruition.

In the Point Loma tradition some Theosophists applied the term World-Mother to their former leader Katherine Tingley, after her death.[1]

H. P. Blavatsky also used the term in connection with Kuṇḍalinī, in her book The Voice of the Silence. 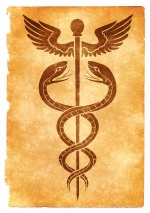 The Greek Caduceus as a symbol of Kundalini

In the first fragment of The Voice of the Silence it is stated:

Let not thy "Heaven-born," merged in the sea of Mâyâ, break from the Universal Parent (SOUL), but let the fiery power retire into the inmost chamber, the chamber of the Heart and the abode of the World's Mother.[2]

In a footnote, Mme. Blavatsky adds:

The "Power" and the "World-mother" are names given to Kundalini--one of the mystic "Yogi powers". It is Buddhi considered as an active instead of a passive principle (which it is generally, when regarded only as the vehicle, or casket of the Supreme Spirit ATMA). It is an electro-spiritual force, a creative power which when aroused into action can as easily kill as it can create.[3]

The "World-mother" is here related to Kundalini. However, Blavatsky does not relate the awakening of this force with the methods followed by Tantric traditions. According to her, it is the result of the activation of Buddhi. In this respect, the World-mother is connected to the heart, which is said to be its abode. Blavatsky stated that "the Heart is the organ of the Spiritual Consciousness."[4] Then, she adds: 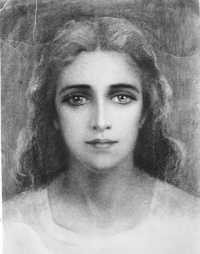 The Madonna of the Annunciation. Drawing by Theodora St. John

The writings of C. W. Leadbeater, Annie Besant and a few later Theosophists of the Adyar tradition refer to this term. C. Jinarajadasa wrote that the "World-Mother" is "an official of the Great Hierarchy, a devi or goddess or angel, whose function is to represent certain embodiments of the feminine aspect of the dual nature of the Divine."[6] C. W. Leadbeater elaborated on this subject as:

The World-Mother, then, is a mighty Being who is at the head of a great department of the organization and government of the world. She is in truth a mighty Angel, having under Her a vast host of subordinate Angels, whom She keeps perpetually employed in the work which is especially committed to Her. That work has so many and such wonderful ramifications that it is not easy to give even the most general idea of it in a few sentences. Let it suffice for the moment to say that in a very real sense all the women of the world are under Her charge, and most especially so at the time of their greatest trial, when they are exercising the supreme function given to them by God, and thus becoming mothers in very deed . . . This is perhaps Her greatest and most impressive function; but She has yet another which brings Her into the very closest connection with humanity, for She has made it a part of Her work to try to mitigate the suffering of the world, to act as the Consoler, the Comforter, the Helper of all who are in trouble, sorrow, need, sickness or any other adversity.[7]

In Christianity, the World-Mother is represented in the person of the Virgin Mary. However, the feminine aspect of the divine is recognized in many religions. In the words of C. W. Leadbeater:

We must not think of this knowledge about the World-Mother as exclusively the possession of Christianity; she is clearly recognized in India as the Jagat-Amba, and in China as Kwan-Yin, the Mother of Mercy and Knowledge. She is essentially the representative, the very type and essence of love, devotion and purity; the heavenly wisdom indeed, but most of all Consolatrix Afflictorum, the Consoler, Comforter, Helper of all who are in trouble, sorrow, need, sickness or any other adversity.[8]

According C. W. Leadbeater, the office of the World-Mother is currently being fulfilled by the Monad that once animated the body of Mary, the mother of Jesus:

Students should understand that a great department of Motherhood exists, and has an important place in the Inner Government of the world. The great Official who is called the Jagat-Amba or World-Mother the head of a department of Motherhood. Just as the Lord Vaivasvata is at present filling the office of the Manu, and the Lord Maitreya that of the World-Teacher, so is the great Angel who was once the mother of the body of Jesus filling the post of World-Mother. It is the work of this department to look especially after the mothers of the world.[9]

It has often been asked whether there are any Adepts living in feminine bodies. The existence of the World-Mother is an answer to that question. Because of her wonderful quality of intense purity and because of her development in other ways, she was chosen to be the mother of the body of the disciple Jesus long ago in Palestine; and because of the wonderful patience and nobility of soul with which she bore all the terrible suffering which came to her as the consequence of that position, she attained in that same life the level of Adeptship. Having reached that, and finding the seven paths open before her, she chose to enter the glorious Deva evolution and was received into it with great honour and distinction.
That is the truth which lies behind the Roman Catholic doctrine of her Assumption; not that she was carried up into heaven among the Angels in her physical body, but that when she left that body she took her place among the Angels, and being presently appointed to the office of World-Mother she became very truly a queen among them, as the Church so poetically says. A great Deva needs no physical body; but while she holds her present office she will always appear to us in feminine form, as will those Adepts who have chosen to help her in her work.[10]

A group within the Theosophical Society in Adyar, India's Esoteric Section attempted in the 1920s to create an organization supporting rituals to worship the feminine aspect of the Divine and bringing forth the priestly qualities of women.

C. W. Leadbeater offered his help in the development of a rite that had been written by Dr. Mary Rocke, his personal physician in Sydney at that time, and "The Temple of the Motherhood of God" was established. This activity activity was not related to or connected with the Liberal Catholic Church. A number of young girls, then resident at The Manor, in Mosman, Sydney, took part in the performance of that ritual. The focus of reverence and devotion in it was Pallas Athena, the Greek Goddess of Wisdom, but it also incorporated devotion and reverence to other Greek Goddesses as well and also to Lady Mary, Mother of Jesus.[11]

The first woman to be completely devoted to this work was the late Dr. Mary Rocke, who actually created a ritual of worship by women who were to dedicate themselves to the ideals presented to them by the Holy Mother. As Dr. Rocke could not herself for many reasons undertake the work of creating an organization, it was undertaken by an English lady, [Lady Emily Lutyens ] then in Australia. But this member slowly lost interest in the work. The work was then passed on to another lady, [Rukmini Devi Arundale] who undertook the responsibility, but who also similarly lost interest in it."[12]

Rukmini Devi and the World-Mother

In much the same way that Jiddu Krishnamurti was proclaimed to be a vehicle of the World Teacher by Annie Besant and Charles Leadbeater, Rukmini Devi Arundale was proposed for the same role in regards to the World-Mother. She wrote in a Foreword to Joseph E. Ross's book Spirit of Womanhood:

The name, 'World-Mother,' was new to me when I first heard those words in 1925. I did not realize that such a Personage was worshipped in the West and did not understand the significance from the Western point of view. It is natural for me and many millions of Indians to worship the Goddess known in Sanskrit as Jagadamba - literally meaning 'Mother of the World.'[13]

She went on to explain that the feminine spiritual quality is recognized in all women in India, so that even the humblest woman is addressed by strangers as "Mataji" or "Amma," meaning "mother." "Spiritual beauty is embodied in the ideal of the mother, and beyond, by the World-Mother.[14]