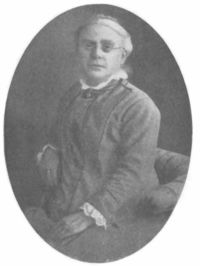 Francesca Arundale was an early member of the Theosophical Society, and a close friend of H. P. Blavatsky and Annie Besant. She was also the great-aunt and adoptive mother of George S. Arundale.

Francesca Arundale and her mother Mary Anne Arundale explored the spiritualist movement for seven years in France and in England. Francesca became a member of the British National Association of Spiritualists, as she recorded in her memoirs.[7] After she read a paper on reincarnation before that group, theosophist Dr. Anna Kingsford invited her to a series of lectures at Kingsford’s home. On July 31, 1881 Miss Arundale and her mother Mary Anne Arundale joined the Theosophical Society in London, receiving diplomas signed by H. P. Blavatsky.[8] Dr. Wyld was president of the British T. S. at that time, and Francesca became secretary of the London Lodge. She was very well-regarded by the early Theosophists, and frequently entertained them at her home at 77 Elgin Crescent in London. Henry Steel Olcott wrote her warm, newsy letters addressing her as "St. Theresa" and "best of grandmothers."[9]

After Holloway arrived in London from Paris on 13 June 1884, [Mahatma] KH wanted her to work with Mohini on their book at the house of Mary Anne Arundale, who lived with her daughter, Francesca, at 77 Elgin Crescent; Blavatsky, too, stayed there when she arrived in London shortly afterwards.[10]

The Mahatmas, or Brotherhood of Adepts, were well aware of Francesca Arundale and her mother, and mentioned them in several letters. On September 8, 1882, Miss Arundale wrote a letter to Madame Blavatsky, praising The Theosophist, to which she subscribed. As the letter was being transmitted to HPB (by postal mail), Mahatma Koot Hoomi added a marginal note about Miss Arundale: "A good, earnest Theosophist a mystic whose co-operation ought to be secured thro' you." It was published as Letter 47 of the Letters from the Masters of the Wisdom, Second Series.

In 1884, Miss Arundale received a letter of her own from Mahatma Koot Hoomi. It has been published as Letter 4 in Letters from the Masters of the Wisdom, 1881-1888, later known as the First Series. See Blavatsky Archives for much more information about her life in the Theosophical Society and the letters she received.

In 1902 she moved to Adyar, Chennai, India, and was active in the Varanasi [formerly Benares] branch of the T. S.

Francesca Arundale became involved in educational work in India in 1903, along with George. She served for many years as Principal of Central Hindu College Girls’ School, and also taught in the boys’ division there. She was Principal of the National Girls’ School at Mylapore, Madras. In 1922 an office was created for her as the Honorary Head of the Women’s Branch of the Education Department of the Holkar princely state. She worked there for a year, helping to establish the Lady Reading Training School for Women Teachers.[11]

In 1896 she became a member of the International Order of Co-Freemasonry, Le Droit Humain. She also participated when Annie Besant formed the first London Lodge of the order in 1902.

Clara Codd, who met her at the Benares convention in 1910, wrote,

She was a little round robin of a lady, very precise in her ways, with large spectacles and her grey hair done up on the top of her head. She always wore coats and skirts, while many of the members followed Mrs. Besant's example and donned the Indian sari. I was sitting one day with a group of the members thus attired for the most part, when Miss Arundale came along.

"Miss Arundale," impulsively ejaculated one, "why don't you wear saris like our President?"

Miss Arundale replied in her precise little voice: "Well, my dear, when I have succeeded in emulating our great President in her virtues I think it will be time for me to copy her dress."[12]

Miss Arundale wrote several books and many articles. The Union Index of Theosophical Periodicals lists 48 articles by or about her. She wrote an account of her friendship with H. P. Blavatsky, My Guest, H.P. Blavatsky. It was published in 1932 at the Theosophical Publishing House in Adyar.

For a list of articles written by and about Miss Arundale, see Union Index of Theosophical Periodicals