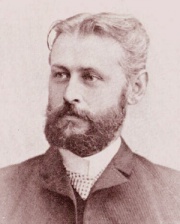 Around 1911 he married his second wife Emily L. Arnhold (30 Mar 1875 – 19 Sep 1955) who was born in England of German parents. She became a naturalized citizen in 1919.[5] By 1907 they had moved to Denver and Neresheimer established himself in new forms of business. He served as president of the American Development and Investment Co and treasurer of the Denver Reservoir Irrigation Co.[6] He was also still paying taxes on the location of his London office.[7]

Daughter Aimée (or Amy) was born in Germany. She married Ernest Temple Hargrove on January 17, 1899 in New York. Subsequently, the Neresheimers, Ernest and Aimée moved to Colorado. Ernest and Aimée had a son, William, born in 1902, and a daughter Joan, born in 1905. By 1910, though, the couple had divorced and Aimée was married to Denver lawyer Milton Smith. She died in Houston, Texas. 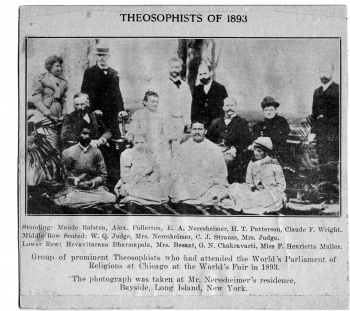 The Neresheimers became involved with Theosophy in 1889. Emil August Neresheimer became a member of the Aryan Lodge in New York on January 22, and Minnie on March 12.[8] In 1893, after the World's Parliament of Religions, Neresheimer and his wife Minnie hosted the Society's delegation as they assembled in New York. Maude Ralston, Alexander Fullerton, Miss F. Henrietta Müller, C. J. Strauss, and Mrs. Ella Judge were listed among the party.

When the American Section split in 1895, Neresheimers were in the contingent that was loyal to Section leader William Quan Judge rather than to the international Society, so their memberships in the Adyar Society ended on April 28, 1895. During the brief period when the Theosophical Society in America and Universal Brotherhood coexisted before their merger into the Universal Brotherhood and Theosophical Society, Neresheimer served as president of the TSA. In 1896 he and his son Frederick traveled to England with Joseph H. Fussell.

Neresheimer served as an agent of Mrs. Tingley in searching for land near San Diego, California, where the Lomaland community was later situated. By 1904 he was engaged as a music teacher at the Raja Yoga School at Point Loma. During the years 1920-1927, Neresheimer served as vice president of the Theosophical University.[9] In 1928 he was treasurer for the Point Loma organization.

The Union Index of Theosophical Periodicals lists 20 articles by or about Emil and Emily Neresheimer.