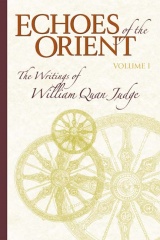 William Quan Judge was one of the principal Founders of the Theosophical Society. His writings are among the clearest explications of the principles of Theosophy. Grace Knoche wrote of his literary contributions:

Using the wide-angle lens of theosophic wisdom, Judge provided trenchant commentary on a variety of themes: Astral Intoxication; Christian Fathers on Reincarnation; Spiritualism Old and New; Is Poverty Bad Karma?; Psychometry; Kali Yuga – the Present Age; Reincarnation of Animals; Suicide is not Death; Comets; and many, many more. A felicitous by-product of Judge's broad coverage of subject matter both in The Path and on his lecture-tours was the popular interest aroused in the study of comparative religion and in the epics and philosophical scriptures of India.[1]

His books Ocean of Theosophy and Letters That Have Helped Me remain classics in the literature, describing in clear language the basic ideas of the wisdom-tradition set forth in the writings by H.P. Blavatsky and the path of spiritual quest. Yet the greater part of Judge’s literary output is to be found in his magazine articles and other writings gathered together in Echoes of the Orient. [2]

Echoes of the Orient

Echoes of the Orient is a compilation of William Q. Judge’s writings. Volume I comprises about 170 articles from The Path magazine, founded and edited by Judge. These are chronologically arranged and supplemented by his popular “Occult Tales.” Also included are a well-documented 50-page biography, numerous illustrations, photographs, and facsimiles. In the second volume readers will find a wealth of theosophical teachings, history, and guidance. Nearly half the book comprises articles from several magazines, as well as Judge's presentations at the 1893 World's Parliament of Religions in Chicago, where he chaired the Theosophical Congress. The remaining sections include Hidden Hints in The Secret Doctrine; Questions from The Vahan, The Theosophical Forum, and The Path; Abridgement of Discussions; and Faces of Friends. Volume III contains tracts and pamphlets, newspaper and journal articles, miscellaneous articles and extracts, and “Suggestions and Aids” to fellow travelers on the Path. [3][4]

Letters That Have Helped Me

In the latter part of 1891 appeared Judge’s Letters That Have Helped Me, a series of letters written by him to “Jasper Niemand” (Mrs. Julia Ver Planck, later Mrs. Julia Keightley) which had originally appeared in The Path. Much later, namely in 1905, there was published at New York a second series of Letters compiled by Jasper Niemand and Thomas Green. Both series have been repeatedly reprinted. [5] 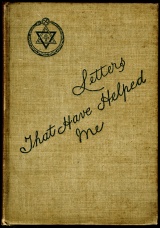 This book shows that William Judge was in intimate contact with American students, with whom he maintained a large correspondence. Judge’s wise and gentle words are a revelation of his understanding of the subtleties of human nature, and of the great depth and strength of heart he possessed as a teacher and a friend to those who studied and worked with him. A second edition of Letters That Have Helped Me, issued 50 years after the passing of Mr. Judge, includes in a third extra section some additional material, including a group of allegorical and occult stories he contributed to the Path and memories of him by those who worked with and knew him well. [6]

Writing to Carrie Rea, on September 6, 1894, George William Russell (AE), a close friend of Judge’s, spoke of these letters as being

written by a man whom I consider the wisest and sweetest of any I have ever met, W. Q. Judge (Z.L.Z.). I have more reverence for him than for any other human being I know of. I hope they will mean as much to you as to many of us. They are not badly written; but do not think of fine or beautiful phrases when reading them, but only of the things it is good to live with and ever to keep in mind. I think he says only things he knows. [7]

Judge served as editor of the periodical, The Path, from 1886-1896. After the American Section of the Theosophical Society was formed on October 30, 1886, The Path became its official journal and the backbone of Theosophical publicity in the U.S.A. As there were few qualified writers at the time in America, Judge wrote a great many articles himself; he did so under a number of pseudonyms, such as Eusebio Urban, Rodriguez Undiano, Hadji-Erinn, William Brehon, Quilliam, Marttanda, Bryan Kinnavan, Zadok, An Obscure Brahman, possibly An American Mystic, and others. His style was simple, direct, and he dealt with a variety of Theosophical and allied subjects. H.P.B.’s admiration of this journal was very marked, and she once referred to it as “pure Buddhi.” [8] Quoting from the first issue of April 1886, Judge gives a reason for producing the publication:

to try on the one hand to point out to their fellows a Path in which they have found hope for man, and on the other to investigate all systems of ethics and philosophy claiming to lead directly to such a path, regardless of the possibility that the highway may, after all, be in another direction from the one in which they are looking.[9]

In 1889 Judge inaugurated a magazine for inquirers – The Theosophical Forum – in which he exhibited a deep understanding of the technicalities of Theosophy.

Index to articles in Theosophical periodicals

The Union Index of Theosophical Periodicals lists numerous articles by or about Mr. Judge, under several names mentioned above:

The Path is available from the International Association for the Preservation of Spiritualist and Occult Periodicals, which offers an almost complete run from April 1886 to March 1896 at the IAPSOP website. Other sources of the periodical are listed at this website.

The Theosophical Forum is not available online for the years 1889-1895 when Mr. Judge was editor.

Collections of articles are available at these websites: 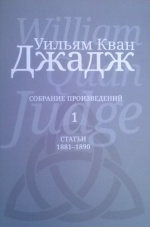 Responses to questions in periodicals

The Theosophy NW website offers the responses WQJ made to questions submitted by readers in several periodicals:

Two important series of papers must be included with Judge's other literary efforts:

Judge was also instrumental in publishing a large number of Oriental Department Papers consisting of Sanskrit and other Oriental Scriptures specially translated for this Department by Prof. Manilal Dvivedi and Charles Johnston. He also issued from June, 1890 through March, 1894, the Department of Branch Work Papers, containing valuable suggestions for Theosophical Work and study.[10]

Online versions of most of Judge's writings at Universal Theosophy website.

He appeared as Occultus in Kate Field's Washington for his Echoes from the Orient series.

In Letters That Have Helped Me, he was designated by the letter Z, and his correspondent had the pseudonym Jasper Niemand.